Alabama’s abundant water, varied ecosystems, dense forests and geology come together to create a land that is immensely bio-diverse. In fact, Alabama contains more variety of animals and plants than any state east of the Mississippi River. To celebrate this variety of nature and natural areas, the Alabama Tourism Department has designated 2020 as the Year of Natural Wonders. 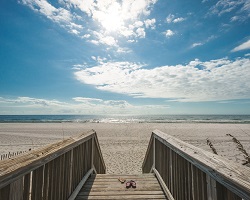 Sugar-white Gulf Coast beaches line the southernmost points of Alabama. The ultra-fine particles of quartz were washed down from the Appalachian Mountains and deposited into the turquoise waters thousands of years ago. Today, visitors explore 32-miles of sandy beaches, including those shared with nesting sea turtles. Volunteers flag the nests every year to help sun seekers avoid crushing the turtles’ eggs. From May to October, walkers may be lucky enough to witness a “boil,” when an underground nest of baby turtles hatches at the same time, emerges from the sand and makes its way to the water. 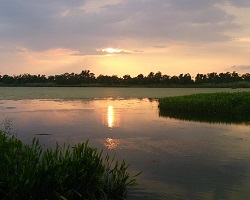 Just north of Mobile Bay spreads the 260,000-acre Mobile-Tensaw Delta, the second largest wetland of this kind in America. Rivers from the north flow into the flat lands and creep into lakes, marshes and bogs. The twists and turns of the delta’s rivers, creeks and tributaries house cypress swamps and bottom land hardwoods teeming with deer, turtles and alligators. More than 300 species of birds have been documented in the area. Much of the delta is remote and best explored by water, but you don’t have to venture into its deepest reaches to see its natural beauty. At the Five Rivers Delta Resource Centre in Spanish Fort, you can view exhibits about the local flora and fauna, watch a nature film, and enjoy a view of the water from the decks. Stop into the Cypress Gift Shop to browse a selection of nature-related gifts, unique jewellery and wood crafts made by local artisans, such as Randi Evans 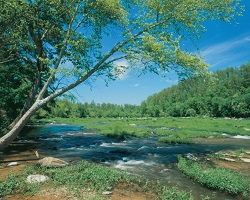 Alabama’s longest free-flowing river, the Cahaba, features an annual spectacle so special it has a festival named after it. On the third Saturday in May, the town of West Blocton celebrates the white, graceful Cahaba Lily with guided tours during the Cahaba Lily Festival. The flower blooms in May and June and is found in only three southern states. It requires a specific habitat of swift-moving water and lots of sun, which is exactly what the rocky shoals of the Cahaba River provide. While the Cahaba River sustains the largest population, notably in large stands and smaller clumps, the lily also can be found in running shoals of Hatchett Creek and the Tallapoosa River. 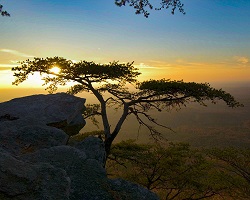 At the foothills of the Appalachian Mountains rises Alabama’s highest natural point, Mount Cheaha, at 2,407 feet above sea level. In the fall, the mountain’s mix of oak and hickory trees interspersed with pines puts on a show of fall colours to rival those found in more northern states. Check it out from the 26-mile Talladega Scenic Drive, taking Highway 281 near Heflin, Alabama, until the road ends at Adams Gap Road and Forest Service Road 600. This route travels over the summit and through the Talladega National Forest, passing rural landscapes filled with rock outcroppings and rolling hills. Stop at Cheaha State Park for excellent views and to officially note the U.S. Geological Survey’s high point marker in front of Bunker Tower, one of several stone buildings built by President Franklin Roosevelt’s Civilian Conservation Corps (CCC). On a clear day, you can see for miles from the top of the observation tower. Down below, poke around the CCC museum to learn about the men who helped establish Cheaha State Park. 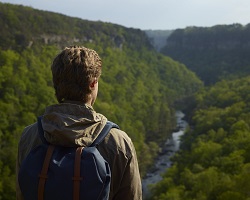 Northeast Alabama also harbours the Little River Canyon, a U.S. National Park site designated a National Preserve by public law. Formed by the erosion of water over millions of years, the canyon’s rock bluffs drop to more than 600 feet in some spots. The Little River, which flows atop Lookout Mountain and through the canyon, provides recreation for hikers, anglers and paddlers. Little River Falls marks the beginning of the canyon and is one of the highlights of the area, particularly after a recent rainfall. Although not usually associated with mountainous terrain, a bog exists in the canyon and garners interest for endangered green pitcher plants that grow here. This carnivorous plant traps insects in its tube-shaped leaves and digests them with enzymes. If you come across one, consider yourself lucky, and take only pictures. Learn about more of the canyon’s assets at the Little River Canyon Centre located on Highway 35. The building houses exhibits, a theatre and National Park Service staff who can answer questions and recommend hikes and observation areas. 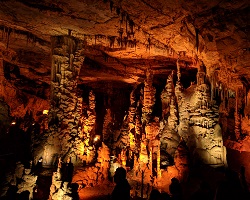 Cathedral Caverns has been open to visitors since 2000 when it was declared a state park after purchase from a private owner. Although the above-ground amenities should not be ignored—camping, hiking and gem mining—the real draw here is underground. Step into the caverns’ 126-foot-wide entrance, accessible to wheelchairs, and embark on a 90-minute, guided tour of karst topography—sinkholes, underground streams and caves etched into area limestone. The tours, available year-round and multiple times per day, lead to one of the largest stalagmite columns in the world. At 45 feet tall and 243 feet in circumference, it is appropriately named “Goliath.” Other formations include a “frozen waterfall,” a “pipe organ” and “cave bacon.” A stop here is particularly welcome on hot summer days since the caves’ temperature hovers around a refreshing 60 degrees. 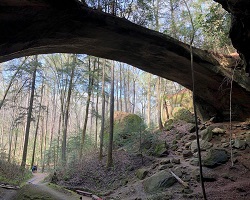 For a natural wonder above ground, visit Natural Bridge in Winston County. As its name implies, the rock arch spans 148 feet and 60 feet high to connect two land masses, resulting in the longest natural bridge east of the Rocky Mountains. The landmark formed as the sandstone washed away and left iron ore behind. Due to safety concerns, visitors cannot walk across the bridge, but you can observe its magnificence from below after paying a small entrance fee. Take a picnic and hike the one-mile loop. While in the area, keep your eyes open for eastern hemlock. The area is one of the few places in Alabama where this graceful, shade-tolerant conifer grows. 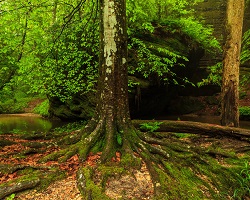 Located about 13 miles south of Russellville lies Dismals Canyon, a privately owned, 85-acre sandstone gorge with large rock formations and two waterfalls. Many years of moving water sculpted the topography, which results today in rock shelters, natural rock bridges and a 16-inch-wide rock squeeze known as “Fat Man’s Misery.” Walk the 1.5-mile trail to see and feel the formations while also delving into the lush landscape of tulip poplars, beech trees, hemlocks, mosses and ferns. On nights in May and June, a unique element lights up the canyon. Dismalites, sometimes called a glowworm, are actually fly larvae (Orfelia fultoni) that emit a bluish light to attract prey. Special guided night tours are available to see these dismalites, the only bioluminescent insect in North America.

For more information on any of the above email alabama@deep-south-usa.com