The Incline Railway at Chattanooga, Tennessee, is a funicular railway system that's been running for over 125 years old! Breath taking views of the Chattanooga Valley can be seen from the observation deck of the Lookout Mountain Station, the highest overlook on the mountain. You'll get the opportunity to visit Civil War sites, Rock City and Ruby Falls.

What is a Funicular Railway?

A funicular railway is just that….fun! It is also known as an inclined plane or cliff railway, a funicular railway normally solves the problem of transporting people up extremely steep slopes. They’ve been used for hundreds of years and are an extraordinary feat of ingenuity.

The Incline Railway located in Chattanooga, Tennessee - and funicular railways in general - work by pulling trains up steep grades with a cable. With the cable, the steel wheels don’t need to have tractions, but can be used primarily to guide the train along the tracks. The funicular railway is made even more efficient but counterbalancing two train cars on the same track and using the weight of one to help pull the other up the mountain. The Incline has two cars that ride on the same single mile-long track. When the cars come close together, the track splits into two as a “passing loop” for both cars to pass one another. This single track, passing loop system, is used in funicular railways across the world! 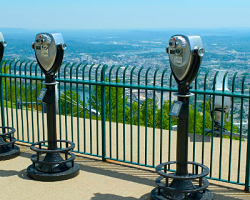 Funicular derives from the Latin word funiculus – which translates to ‘rope’. That’s what they used to be made from! There were rope cables in the funicular loop system powered by either humans or animals. The oldest known funicular is in Hohensalzburg Castle and it’s known as the Reisszug. Now it’s run by a metal cart, cables and an electric motor but the Reisszug has been in operation since the early 1500s!

The Incline Railway in Chattanooga opened in November 1895 and was constructed by John Crass and the Lookout Mountain Incline Railway Company. The cars originally operated on coal-burning steam engines, which were upgraded to two 100-horsepower motors in 1911. The Incline has been transporting eager passengers up Lookout Mountain for over 125 years!

The Incline Railway has now begun daily departures from the lower station in St. Elmo. When you are ready to ride up you will learn the history and take in the beautiful views aboard the brand new railcars. Then coming back down the mountain you're treated to a great collection of unique shops, restaurants and attractions. The Incline provides a good, family day out in Tennessee.