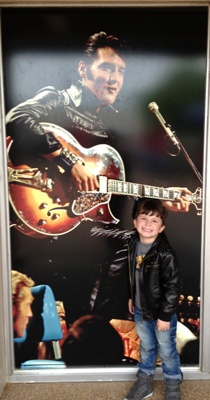 We flew with United Airlines from London Heathrow, via Newark, and even after getting up very early my children (ages 4 & 8) were still too excited to sleep on the first leg of the flight. With a selection of films, many activity books (including one for the husband too) and food there was far too much going on but my top tip would be to definitely get some sleep on the connecting flight – worked a treat for us as kids went to bed at 8pm and slept through until 7am – no jetlag for them!

After purchasing a second-hand sat nav fully loaded with American maps from Ebay (or GPS if we're doing it the American way!), we collected our hire car and checked in to the Residence Inn in downtown Memphis. We were staying in a two bedroom suite, perfect for a family travelling with young children. The hotel offers a great breakfast, including freshly made waffles daily and all the traditional favourites. You can also grab a bite to eat and something to drink (including beer & wine) on their complimentary evenings Monday-Wednesday. The hotel is a great location to walk around downtown Memphis or travel the Memphis Trolley, which has a trolley stop at the top of the road.

While I had some work to do, my husband and children decided to visit Mud Island River Park. They took the Monorail across the river where you can experience great views of downtown Memphis and the Mississippi River. Mud Island has a range of family activities and being a sunny day the kids couldn’t resist splashing in the Riverwalk, a to-scale model of the Mississippi River. The Mississippi River Museum explores thousands of years of river history and includes two full size boat replicas that you can board and explore.

In the afternoon they all headed to the Stax Museum of American Soul Music, a great museum dedicated to all things Stax and soul. The dance floor fitted with disco ball, lights and continuous music videos, plus the stage clothing and fur-lined Cadillac of Isaac Hayes kept the children entertained. The museum is full of exhibits highlighting video interviews, photography, clothing and records with iPad listening stations playing more than 300 Stax songs. The end of the tour has a great gift shop with very cool and funky t-shirts and while my husband was at the till the children also managed to treat themselves to badges, pencils and keyrings – some great little souvenirs! They used the car, but there is now the Memphis Hop that travels out to the museum and is free for children under 12.

Dinner that evening was at Hueys, a really fun family-friendly restaurant also in downtown Memphis. Molly tried the world-famous Huey burger and said it was the best burger she has EVER tasted – she’s still talking about it back here in the UK! Entertainment is also provided as everyone is encouraged to try and get their toothpicks stuck in the ceiling by shooting them through a straw, also known as frill-pick shooting. If you are there on a Sunday you can listen to some great live blues!

The following day was a trip to Memphis Zoo, voted one of the best zoos in America it was not to be missed!  We saw polar bears, pandas, sea lions and penguins – also a great place to let Molly (age 8) loose with the camera! This is also on the Memphis Hop Shuttle Route now.

If you haven’t heard of The Peabody Ducks this is something not to be missed and a highlight for the children! At 4.30pm we were at The Peabody Hotel, ready to watch the marching ducks. It is very popular and we were surprised how many people were already there, but children can sit at the front so they don’t miss anything. At 5 pm The Peabody Duckmaster tells you the story of the ducks before instructing them to jump out of the fountain in the grand lobby and strut their stuff down the red carpet, into the lift and back up to the rooftop terrace. The ducks march daily at 11am and 5pm and it really is something you have to see to believe!

We decided that evening to dine where the locals dine and try Central BBQ and gave us another reason to ride the Memphis' vintage trolley system – always a highlight for the children. Pulled pork and slow cooked ribs were recommended to us with a side order of slaw and onion rings. We even came away with souvenirs for the kids of Central BBQ cups after chatting with the staff and them being quite excited we had travelled from the UK. 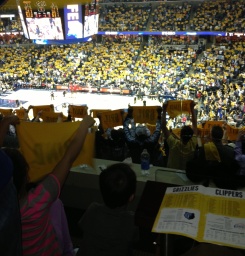 The following day was Saturday and we were lucky enough to be in town when the Memphis Grizzlies were playing the LA Clippers in the NBA Play-Offs at the FedEx Forum, and if you can get tickets this is a great family activity. Located next to the Rock’n’Soul Museum at the end of Beale Street we were able to walk from the hotel and have an experience of a lifetime – guaranteed family fun! Everyone’s seats have yellow towels, which you must wave around above your head whenever a hoop is scored. The venue is huge and the noise creates an amazing buzz, and although none of us are basketball fans you can’t help but get involved and be enthralled with the game, before you know it you are shouting "DE-FENSE" with the rest of the fans. There are LOTS of breaks in the game due to TV adverts but there is entertainment provided every time from Cheerleaders, Grizz the Mascot and even music when a piano was wheeled out. If you are in the right place at the right time you might even catch a t-shirt that is shot into the audience by Grizz himself!

Next on the agenda was a visit to Elvis Presley’s Graceland. Tickets include an audio tour and we were provided a spare pair of headphones for Sam as he’s only 4 so he could join in if he wanted to. After catching the bus across the road you can take photos outside before walking up the steps and entering Graceland. You can tour the house at your own pace, and with Elvis’ eccentric taste the children were always excited to see what was in the next room. Sam particularly enjoyed the outfits and listening to the music, and as he was wearing his leather jacket he had to have his picture next to an Elvis 68 Comeback Special picture (see picture above!) The tour also includes the Elvis Automobile Museum, Elvis’ custom jets, the Sincerely Elvis Museum plus there’s always a special exhibit that changes regularly.

I had visited Charles Vergos’ Rendezvous restaurant previously and was keen to take hubby as he is a big fan of ribs but there was an hour’s wait if you hadn’t booked and with hungry children it wasn't an option so after having a vote and the kids won we returned to Hueys! But Rendezvous is a Memphis must due to their world-famous Southern specialty dry-rub barbecue ribs so would definitely recommend making a reservation. Another great lunchtime place is Gus’ Fried Chicken, but be warned it’s spicy!

Bedtime stories that night were talking about our favourite things in Memphis, Molly (age 8) loved Mud Island and Graceland, while Sam (age 4) enjoyed firing the cocktail sticks at Hueys, riding the Memphis Trolley and the Grizzlies basketball game the best. But everything we did in Memphis was great, we managed to fit so much in but it was time to hit the road, so after filling up on another great breakfast we were on the road and heading to the birthplace of Elvis Presley at Tupelo...

If you would like a Memphis Travel Guide to help plan a Memphis holiday, click here. The roadtrip continues with Part 2: Tupelo, Part 3: Nashville and Part 4: The Great Smoky Mountains.