Travelling Around Tennessee with the Family: Part 3 Nashville

The Jordan's have arrived in Nashville – Music City! 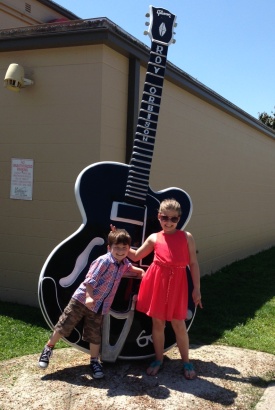 After settling in to Millennium Maxwell House, which is located just outside downtown Nashville, we decided to make use of the free shuttle bus that runs on a loop from the hotel to downtown from 7am to 10.30pm every day, as well as other popular Nashville attractions on request.

The shuttle drops you on Broadway and as soon as you are on the street you can hear live music everywhere! Puckett’s Grocery & Restaurant which is located on Church Street, just a short walk up 5th Avenue North was recommended to us. We had a short wait – but it’s definitely worth the wait or you can make a reservation in advance. This is an award-winning restaurant that is open seven days a week for breakfast, lunch and dinner. The Southern food is great, but what’s also great is the live music they have every night featuring local songwriters and bands on stage at the front of the restaurant. You can look online to see who is playing but you should definitely make this a place to eat while you are staying in Nashville.

After finishing our meal we walked back down to Broadway and went to Rippy’s, a live music bar where you can take children.  A lot of bars along Broadway are for over 21s after 7o’clock, but Rippy’s and Robert's Western World both allow under 21s until 10 o’clock and there’s still cold beer and live music so just as enjoyable!

The following day was a gorgeous sunny day so we decided to fit in as many attractions as possible! First stop was the Ryman Auditorium. Which is the Mother Church of Country Music and so many greats have played here since 1892 making it a National Historic Landmark. When we visited Little Big Town were setting up on stage ready to perform that evening but it didn’t stop them letting people look around. Backstage tours are available daily and you can also Make A Record in the recording studio. We then continued our self-guided Nashville tour to the Country Music Hall of Fame, walking past the new Johnny Cash museum which wasn’t open at the time but is now!

This country music museum is huge! Your entry ticket also allows you a visit to RCA Studio B, a short bus trip away. Studio B takes you back to an exciting time when Are You Lonesome Tonight? By Elvis Presley and I Will Always Love You by Dolly Parton were recorded in this very studio. You can even sit at the piano where Elvis played. We headed back to the Country Music Hall of Fame to continue the tour. I was worried that we would have to be quick looking around with the children, but the museum seems to have taken into account the fact they need to keep children entertained. On the first floor there is a colouring table for them to design their own country music outfit, plus listening stations with games on touch screens. My daughter however was too busy listening and watching the Taylor Swift exhibit to pay too much attention to anything else! On the second floor there were pictures projected onto the floor that when the children run over it breaks up into pieces – again something that kept them entertained and we could read and see the other exhibits. If you are a country music fan you could spend a whole day here, especially as they are expanding in 2014!

That evening we ate at Margaritaville, again located on Broadway. This was a great restaurant for the family. It’s not traditional Southern food, but the food was good and they have Edgar the Entertainer, a stilt walker that’s there every day making balloon hats for everyone – great entertainment! We also decided to stop at Tootsies World Famous Orchid Lounge, voted no.1 Honky Tonk in the World located next to the Ryman Auditorium. You need to be in here before 7 o’clock if anyone with you is under 21 and mine where the only children in there, but we stayed for one drink and watched some live music where many greats including Patsy Cline, Willie Nelson and Hank Williams have performed.

Even walking along Broadway was entertainment for the kids, there are bright lights and live music all along plus doormen with Stetsons and cowboy boots that were high fiving our little boy at every bar, Sam was even invited to the doorway of one bar so he could strum the guitar of a live band and given the pick as a souvenir afterwards.

Molly (age 8) said her favourite thing in Nashville was seeing the Taylor Swift exhibit at the Country Music Hall of Fame and Sam (age 4) loved all the guitars and swimming in the sunshine at the Millenium Maxwell House Hotel.

We are not necessarily country music fans, but we are music fans and watching live music every day was fantastic, and something we really enjoyed as a family, this place really is Music City!  You can purchase a Total Access attraction pass which is good value for money, it costs $50 and allows you access to 4 attractions from a list of 16 options, plus you can visit the Parthenon for free. We were only here for two nights but other places we would like to have visited included the Bluebird Cafe, Loveless Cafe, shopping at Gaylord Opryland Resort and Grand Ole Opry.

But we were ready to hit the road again and head to the Great Smoky Mountains ready to experience Dollywood! We filled up on a breakfast at Cracker Barrels – American style pancakes all round! – before heading to Pigeon Forge...