The Muscle Shoals Documentary has arrived in the UK

Muscle Shoals – The Incredible True Story of a Small Town with a Big Sound comes to the UK. Watch the trailer and see a list of cinemas to find a screening near you. 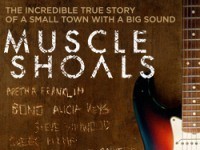 Located alongside the Tennessee River, Muscle Shoals, Alabama is the unlikely breeding ground for some of America's most creative and defiant music. 'Muscle Shoals' the Documentary Film is coming to cinemas in the UK.

Official selection at the Sundance Film Festival 2013 in London earlier this year, Audience Award winner at Hot Docs 2013 and Boulder International Film Festival Winner 2013. This is a must-see film! Watch the trailer…

The Muscle Shoals documentary was recently on the David Letterman show and featured a performance by Alabama artists Candi Statton, John Paul White, Jason Isbell and The Swampers. This song is one that is showcased in the film, Muscle Shoals, that is out in the UK now.