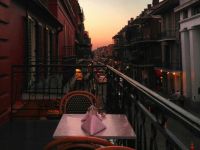 Apparently the restaurateurs in New Orleans have forgotten that they operate in "The Big Easy”. No element of the city's essential framework – schools, housing, hospitals, music scene or barroom abundance – has shown as much post-Katrina success as the dining scene. Not even close. "I've never seen anything like this," says third-generation restaurateur Dickie Brennan, who marvels at the number of independent culinary pros opening hotspots in underserved neighbourhoods.

Foodies compare openings year-over-year or even month-over-month. By Tom Fitzmorris' count, blogger of The New Orleans Menu Daily, 89 places opened last year and 43 have this year in a city with a population of 370,000. To get a flavour of the new dining scene, check out these six noteworthy places that have opened in the past two years:

Donald Link got inspired by open-fire cooking during a trip to Uruguay and had wanted to add a seafood place to his portfolio. So he and his partners renovated an old coffee roaster operation, installed a custom-made wood-burning grill that makes charcoal from oak and pecan, and began serving rustic fish dishes that nod to South Louisiana. The preparations are mostly simple – addictive fried bread with sea salt, battered fish sticks, and shrimp rolls – though some have twists. Grilled corn on the cob comes with white barbecue sauce, and catfish arrive in a chilli broth accompanied by pickled greens. Whole roasted gulf coast fish for the table is the reason to visit. Redfish, snapper, pompano and grouper are frequent options and their prices vary daily, though a redfish that serves four goes for about $45.

Competing with Peche for hipness is Italian-inspired Mariza, which Ian Schnoebelen (who also runs Iris) and wife Laura Casebonne opened in a renovated industrial space in the Bywater. Mariza embraces many of the best trends in contemporary restaurants: impeccable regional sourcing, a gently priced wine list, menus with few clichés and sane food prices (most main dishes are $12 to $18). This is a perfect place for grazing, with a menu that offers lots of truly interesting choices among cured meats, salads, bruschettas, pastas (offered in half-portions) and pizzas. Those with heartier appetites will love the whole fish of the day or the braised lamb belly.

This bare-bones eatery on Magazine Street, which opened to little fanfare in February 2012, now enjoys a sizeable and apparently satisfied following. The area is home to a significant Vietnamese population and there are numerous small restaurants serving the native cuisine, but most are located across the river from the city. So having easy access to this simple, healthy and subtly spiced food in the heart of the city is a true delight. The menu is compact and broken down into pho (noodle soups), spring rolls, banh mi (sandwiches), bun (rice noodles with dipping sauces) and some curries and crepes. Best of all, everything's priced at $10.50 or less. That makes the $9.50 filet mignon pho – a rich, fragrant and wholly magnificent version of that staple – one of the city's best bargains.

R'evolution at the Royal Sonesta Hotel

New Orleans hasn't seen a luxury restaurant quite like this, at least not along the chaotic Bourbon Street corridor. The sumptuous interior has intimate dining areas, each with a slightly different feel and a formal ambience throughout. The menu from chef/restaurateurs John Folse and Rick Tramonto aims for modern expressions of Louisiana fare and embraces gulf coast fish, game and chops, salumi, potted meats and terrines and pastas, plus a half-dozen caviar options. Among the highlights is a Triptych of Quail, where the birds come Southern-fried, stuffed with boudin sausage and glazed with Absinthe. You can spend a lot of money here (steaks range from $35 to $62) but you can also have a satisfying meal with a couple of appetisers, most notably the beer-battered crab beignets and the fire-roasted oysters.

Chef Dominique Macquet, from the Indian Ocean island of Mauritius, distills a wealth of influences into a personal style that favours lightness, elegance and vibrant accents. That's embodied in dishes such as grilled cobia with highlights of arugula oil and kaffir lime, sautéed sweetbreads with chimichurri, and crispy lamb belly with minted mozzarella. Those and other delights (entrees in the mid-$20s) are served up in a sleek, airy place with outdoor dining in the rear.

When Dickie Brennan opened this beautiful three-level place adjoining Le Petit Theater on a corner of Jackson Square in May, it immediately gave the French Quarter another attractive and slightly more upscale option. The menu re-energises classic French Creole fare (entrees $15–$40) and offers lots of options, including three egg dishes, a crepe that changes daily and a dozen side dishes. The rich, seafood-loaded court bouillon and the tart "à la Bouille" filled with custard and a rum-caramel sauce are the standouts so far.

You can read the full USA Today article here.