Read How Muscle Shoals Became Music's Most Unlikely Hit Factory by Mick Brown, Telegraph.co.uk to coincide with the release of the documentary film 'Muscle Shoals'. 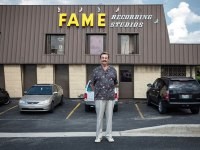 In January 1967 a young singer named Aretha Franklin arrived in the small Alabama town of Muscle Shoals, her career hanging in the balance. At the age of 25 Franklin was already a music veteran. She had recorded nine albums, none of which had properly captured the fiery, transcendent intensity of her voice or the rapt, prayerful beauty of her piano playing. But over the course of just a few hours, in a studio where she had never worked before, with musicians whom she had met for the first time that day, Franklin would record not only the most important song in her career but one of the greatest songs in the history of pop music, I Never Loved a Man (the Way I Love You). What made this record all the more remarkable was that the backing musicians who provided the brooding, soulful and unmistakably black sound were in fact white – country boys who had grown up in the 1950s and 1960s in what at that time was the most racially troubled state in America. Equally remarkable was the fact that the recording session would end in an explosion of racial tension that would lead to Franklin leaving Muscle Shoals the next day, never to return. She had recorded only one song. But it would go to the top of the charts around the world, and make her the unchallenged Queen of Soul.

The Fame studio, a squat, bunker-like building, stands on a busy road junction, adjacent to a chain pharmacy and an auto-parts store. Above the doorway to the studio where Franklin recorded I Never Loved a Man a sign reads, 'through these doors walk the finest musicians, songwriters, artists and producers in the world'. It is no idle boast. Franklin was one of scores of artists who made their way to Muscle Shoals to record in the 1960s and 1970s. The roll call of names is extraordinary: Wilson Pickett, the Rolling Stones, Bob Dylan, Rod Stewart, Paul Simon… For a brief and exhilarating period Muscle Shoals rivaled New York, Los Angeles and London as one of the most important recording centres in popular music.

You need only visit Muscle Shoals to realise quite how remarkable this was. The town is one of four – the others are Florence, Sheffield and Tuscumbia – that cluster along the Tennessee River in the north-western corner of Alabama, and are collectively known as the Shoals. The combined population is 69,000. It is a place of wood-framed houses, their porches entwined with bougainvillea; of handsome antebellum mansions – and of restaurants serving fried catfish and turnip greens. Thick forests flank the river, which rolls sluggishly in the summer heat.

For an anonymous backwater the Shoals has an improbably rich musical history. Florence was the birthplace of WC Handy, the ‘father of the blues’, and of Sam Phillips, who in 1953, convinced, as he put it, that ‘if I could find a white man who had the Negro sound and Negro feel, I could make a billion dollars’, had the presence of mind to record an 18-year-old Elvis Presley singing the blues song That’s Alright Mama – effectively creating rock’n’roll.

Now the documentary film Muscle Shoals – an impressive directional debut by Greg 'Freddy' Camalier – explores this history through archive footage and interviews with musicians including Franklin, Mick Jagger, Keith Richards and Alicia Keys. But the star of the film is a man of whom few are likely to have heard, whose life story might have been torn from the pages of a Southern Gothic novel and who single-handedly put Muscle Shoals on the musical map. Rick Hall is a classic example of a type that no longer exists in the music industry: a musician, songwriter and businessman who could write, arrange, produce and engineer a song, release it on his own label, then persuade disc jockeys to play it and distributors to sell it. In short, a man from a time before music was an ‘industry’ at all.

To read the entire Telegraph article, see photos from the recording studio and listen to soul music, click here.