I read a great piece in Metro News about the top 5 things to know about New Orleans, and wanted to share with you… 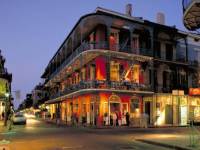 The picture-perfect French Quarter is the postcard image of New Orleans; it’s a gleeful celebration of instant gratification. Touristy it may be, but there’s something deeply sensual about the French Quarter, where steamy scents and cascading colours create a Moulin Rouge-sequel street scene.

It’s not all casual: there’s an underlying current of the mysterious, the exotic – this is, after all, the US home of voodoo and the dark side never feels far away. The French Quarter Festival takes place from 10th to 13th April, with four days of music, food and colourful entertainment.

Mardi Gras (literally ‘Fat Tuesday’) was originally the last great shakedown before Lent, introduced by French colonists in the 1740s. This year’s festival falls on March 4th and it’s a gaudy, glitzy and sometimes gruesome celebration of New Orleans’ rich and rowdy African, Creole and European heritage. The focal point of Mardi Gras is the costumed and choreographed street parades, from which small gifts or ‘throws’ are hurled into the crowd.

History reigns supreme in The Big Easy and, with folklore and legend from the Cajuns and Creoles intertwined with stories of ruthless plantation owners, vampires and voodoo, it’s not hard to see why it’s known as America’s Most Haunted City. Built for the mercantile elite in the mid-19th century, a must-see is Brevard House (1239 First Street), the home of Anne Rice, author of Interview With The Vampire.

BORN ON THE BAYOU

‘Wish I was back on the Bayou, Rollin’ with some Cajun Queen. Wishin’ I were a fast freight train, Just a chooglin’ on down to New Orleans.’ The 1968 hit from Creedence Clearwater Revival goes some way to highlight the relationship between New Orleans and Bayou Country, the name for the swampy inland marshes that surround much of the city.

The term denotes the slow-moving, plant-filled waters that are home to crayfish, catfish, toads, turtles, crocodiles and alligators. Notable examples are Bayou Teche and Bayou Lafourche, both of which can be explored on high-speed airboats that glide over the water’s surface (www.airboatadventures.com).

Tiny, exotic Avery Island is a swampy spit surrounded by bayous, levees and alligators, settled by the Avery family in the 1830s. Many years before that, the indigenous people had discovered Avery’s hidden secret – a massive underground salt dome where the local tribes extracted salt to trade with tribes as far away as Ohio.

In 1868, when Edmund McIlhenny married into the Avery family, he exploited the salt resources and nearby sugar plantations to create and manufacture Tabasco Pepper Sauce – to this day, every bottle of Tabasco sauce in the world is still produced on Avery Island.

You can read the full Metro News article here.