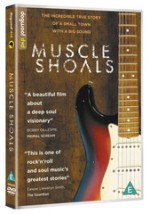 Located alongside the Tennessee River, Muscle Shoals Alabama is enjoying the limelight following the release of the award winning documentary Muscle Shoals (muscleshoals.co.uk) which is now available on DVD in the UK and Ireland following the film’s launch last October. The film which tells the true story of ‘a small town with a big sound’ features many of the stars who recorded there including Mick Jagger, Keith Richards, Aretha Franklin and Etta James.  At the heart of the story is Producer Rick Hall who founded FAME Studios. Today visitors to The Shoals can tour FAME Studio, a ‘live’ studio recently used by Alicia Keys. The iconic Muscle Shoals Sound Studio is also currently being restored to a fully functioning recording studio. You can buy your copy from Amazon.co.uk.

"This is one of rock'n'roll and soul music's greatest stories" - Casper Llewellyn Smith, The Guardian

"Joyous, uplifting and as funky as the musicians it celebrates" - Telegraph