Day seven - Neil gets to fulfil a lifetime ambition and sits courtside for an NBA Basketball game... 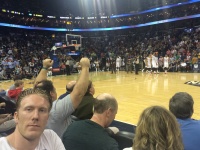 Day seven and the trip is very much nearing its end, however this is not to say that I don't have a couple more busy days left in Louisiana, plenty BIG but I suspect nothing quite so EASY about the next 48 hours.

As I depart my plantation home from last night the reality sets in that sadly that's not my life and I will not be indulging in the prerequisite 4 mint juleps before breakfast that one previous owner swore by.

As I meander along the Mississippi on my way to New Orleans I experience a couple of further plantation homes, my visits to Oak Alley, Laura and Destrehan Plantations very quickly correct my foolish belief that all plantations were the same, how wrong could I have been?

Oak Alley famous for the signature picture along the oak lined pathway to the banks of the Mississippi is a great snapshot of time when the house was a working plantation home, Laura is different very fundamentally in that it was a Creole owned plantation and this is clear to see as you approach the usual white exteriors I've become accustomed to on other plantations replaced by bold bright colours & finally Destrehan the oldest existing plantation home in the area and also holds such a fantastic artefact as the original deed from Thomas Jefferson dated 1804 that signalled the introduction of the Orleans Territory as an American representative democracy.

I arrive into New Orleans the place that sparked my passion for Louisiana when I 1st visited the city 12 years ago the food, the places and more importantly the people, will get you like that in Louisiana!

As previously mentioned I'm a sports fanatic and there's certain things every sport fan wants to do but probably think they'll never get chance to......courtside seats at an NBA basketball game is on that list for me!! Well thanks to the hospitality of Tico Soto of the New Orleans Convention & Visitors Bureau this can go in the ticked and done box along with seeing my beloved Birmingham City lift a cup and play in Europe......and wow what a game, New Orleans Pelicans defeated the Boston Celtics 121 - 120 after overtime when Boston equalised in the last second of normal time. If this keeps up I'm going to have to repopulate this list!! England's year in Brazil perhaps?? Now don't be ridiculous Neil!