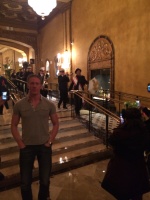 When you can wake to the sound of the street cars in New Orleans, take breakfast as they roll on by you really start to realise life in New Orleans is unique and different to almost any other city.

I'm off to the Superdome, home to The New Orleans Saints. I am in what I am told is an incredibly privileged position as I am taken on a tour of the stadium something that is not common nowadays due to homeland security restrictions. I am later in the day told an interesting fact along with the Great Wall of China & The Pyramids, the Superdome is one of 3 man made structures that can be seen from space.

The day then takes me to the fantastic World War 2 Museum, the museum concentrated on the contribution of the United States in the allies victory in World War 2. The museum has a large atrium where aircrafts including a Supermarine Spitfire, Messerschmitt Bf 109, Douglas SBD Dauntless and a Douglas C-47 are suspended from the ceiling. The museum also shows an award winning 4D film called Beyond All Boundaries which shows an overview of all aspects of the war.

The museum also features a display on the contribution of the Higgins Landing Boats with the flat bottom design that was created in Louisiana.

I spend an afternoon that starts with a tour of the Natchez Paddle Steamer, the last original steamer still operational in New Orleans a must do for anyone travelling as this is about as iconically New Orleans as it gets.

Finally it's the hop on hop off bus tour - always a great way to see as much of the city and get a good insight of the history from the brilliantly informative guides. A statue of Joan of Arc is accompanied with a story that I'm told always gets a laugh and it's that the statue is endearingly known by locals as Joany on the Pony.

As the day comes to a very pleasant end, and I enjoy my dinner in Domenica at the famous Roosevelt Hotel, I become aware of music emanating from the lobby, it's St. Patricks Day and one of the marching bands are passing by, and to accompany them there's a marching group starting in the hotel.........this is New Orleans in all it's splendour!!

For New Orleans Travel Guides or maps email louisiana@deep-south-usa.com or call us.