Beverley Knight in Memphis the Musical 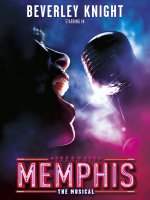 In the underground nightclubs of 1950s Memphis, Tennessee, the soul of a new era is dawning as the first incredible sounds of rock ‘n’ roll, blues and gospel are emerging into the mainstream.

Falling in love with a beautiful club singer, one young man’s vision to bring her voice and her music out of the clubs and onto the airwaves of America will fly in the face of cultural divides and spark a music revolution that will shake the world.