BBC4 recently showed Muscle Shoals: The Greatest Recording Studio in the World and you can still watch online until 7th April. 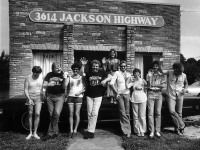 Sweet Home Alabama celebrates music history with the award winning documentary which tells the true story of ‘a small town with a big sound’.

This award winning documentary is set alongside the Tennessee River, in Muscle Shoals Alabama and this is the unlikely breeding ground for some of America's most creative and defiant music. Under the spiritual influence of the 'Singing River', as Native Americans called it, the music of Muscle Shoals has helped create some of the most important and resonant songs of all time.

At its heart is Rick Hall, who founded FAME Studios, and the film looks at his career and triumphs as a Southern soul producer. Overcoming poverty and tragedy, Hall brought black and white together in Alabama's cauldron of racial hostility to create music for the generations. Greg Allman, Bono, Clarence Carter, Mick Jagger, Etta James, Alicia Keys, Keith Richards, Percy Sledge and others bear witness to Muscle Shoals's magnetism, mystery and why it remains influential today. It also spotlights the work of the Swampers, four studio musicians who arted with Rick Hall and later opened Muscle Shoals Sound Studios to great success.

Today visitors to The Shoals can tour FAME Studio, a ‘live’ studio recently used by Alicia Keys. The iconic Muscle Shoals Sound Studio is also currently being restored to a fully functioning recording studio. For more information on Muscle Shoals email alabama@deep-south-usa.com or here are our contact details. If you are in the UK you can watch online for a limited time, we cannot recommond highly enough how everyone should watch this great music story!