To commemorate the 60th anniversary of Elvis' first recordings at Sun Studio, Elvis Presley’s Graceland is planning a variety of activities, starting with a new exhibit at Graceland entitled “60 Years of Elvis.” 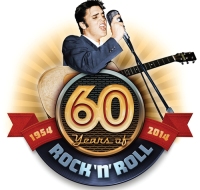 Graceland’s exciting, new exhibit is now open as part of the VIP tour experience. Guests will explore the birth of rock ‘n’ roll music from July of 1954 and journey through the transformation of the King of Rock ‘n’ Roll from delivery truck driver to world-wide singing sensation and star of the silver screen.

Rare artefacts displayed in the new “60 Years of Elvis” exhibit include: Elvis’ personal “That’s All Right” 45rpm record, a pay stub from his early days as a driver for Crown Electric, telegrams home to his parents during his first few days on tour, an original script from “Jailhouse Rock”, his 1955 RCA Records contract, Elvis’ last GRAMMY® Award for his Gospel hit “How Great Thou Art,” along with the jumpsuit he wore on stage that night, Elvis’ wardrobe from “Viva Las Vegas” and the award presented to Graceland and the Presley family upon Elvis’ induction into the inaugural class of the Rock and Roll Hall of Fame in 1986.

The new “60 Years of Elvis” exhibit will be open from now until February of 2015. Graceland is open all year-round with various tour options. For more information on tours, visit Elvis.com/Graceland. Also be sure to keep up with the latest Elvis news and Graceland events by following @VisitGraceland on Twitter and Elvis Presley's Graceland on Facebook.

If you would like a Memphis information pack email tennessee@deep-south-usa.com, click below to enjoy a short time-lapse video showing behind-the-scenes work that went into making the “60 Years of Elvis” exhibit a reality.