On the 50th anniversary of the Civil Rights Act, Nigel Richardson from the Telegraph visited Alabama, to re-discover the roots of the world-changing movement. 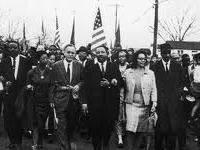 The Telegraph has published an article on the Alabama Civil Rights Trail.  The story, by Nigel Richardson, is the result of the efforts of our Alabama Tourism Department’s UK Representative Della Tully.  Individual tourism offices in the cities Richardson visited, including Tuscaloosa, Selma, Birmingham and Montgomery, assisted him during his visit to Alabama. The article, starting below, includes details to book a trip to Alabama as well as links to many Alabama Civil Rights attractions:

The Rev Thomas Linton was standing in the barber shop in Tuscaloosa, Alabama, where he has worked since 1951, a dapper figure in dark suit and polished shoes. “They sent 97 people to jail that day. I sent 37 people to the hospital.” He pointed at his feet. “The floor was covered with people bleeding. We used every towel we had.” Barber shops occupy a unique place in African-American culture – a place to gossip and confide and, in the era of racial segregation, a sanctuary. If this old green chair, if this improbably large collection of shaving mugs, could talk…

They’d be shouting over each other to tell you about the Tuesday in June 1964 when scores of bloody and beaten marchers were ushered to safety through this door. A hate-filled white mob had set about them with “baseball bats, billy clubs and I don’t know what else” for the crime of asking to be treated equally.

This event, which came to be known as “Bloody Tuesday”, occupies a mere footnote in the history of the civil rights struggle in the United States. Yet it was part of a tide of action and feeling that, 50 years ago on 9th July, reached critical mass with the signing into US law of the Civil Rights Act of 1964, banning segregation in public places and employment discrimination based on race.