Alabama was front and center at this year’s Maverick Music Festival at Easton Farm, located in Suffolk, held each year on the 4th of July weekend. 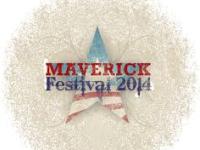 The Maverick Festival is a celebration of Americana music and Muscle Shoals “Swamper” David Hood welcomed music lovers to the new 'Sweet Home Alabama' stage and also held a question and answer session with Muscle Shoals musician Hannah Aldridge after the screening of the Muscle Shoals movie which was also shown twice during the festival.

The Alabama Tourism Department was an official sponsor of the event that included over 50 performers during a three-day lineup with more than 3,000 American music lovers attending the festival.  The Alabama Tourism Department’s UK Representative Della Tully and tour operator Ultraviolet Music Travel were at the festival in a special Sweet Home Alabama booth to respond to people enquiring about trips to Muscle Shoals and other areas in Alabama.

You can read about this year's festival from a first time visitor by clicking here and keep up to date with the news for next years festival, taking place 3rd, 4th & 5th July 2015, by following @mavfest on Twitter.

If you are interested about visiting Muscle Shoals email alabama@deep-south-usa.com and we will be happy to help plan your trip!