Summer may be winding down, but don’t start singing the blues just yet. Whisk those doldrums away with a last-minute getaway to Memphis. 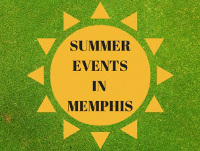 Finger-lickin’ barbecue, live music, world-famous attractions like Graceland and Beale Street – Memphis has all of this and so much more. Think funky shops, neighbourhoods with personality and history you can’t find anywhere else. It’s all waiting for you in Memphis. The Memphis Convention and Visitor’s Bureau have put together seven must-see Memphis attractions to show you the best of the Bluff City this summer.

Country superstar, Jennifer Nettles takes the Live at the Garden stage on Friday, August 1. General admission tickets are only $45.

Marisol: Sculptures and Works on Paper

Maria Sol Escobar, otherwise known simply as Marisol, is a sculptor and major figure in post-war American art. This exhibition at the Memphis Brooks Museum of Art displays 34 of Marisol’s most important sculptures and works on paper including a comprehensive examination of Marisol’s life and work.

Celebrate the life and impact of the “King of Rock ‘n’ Roll.” Get ready for nine days of fun, entertainment and music. From the Ultimate Tribute Artist Contest to the solemn Candlelight Vigil, you don’t want to miss a minute of the action-packed festivities.

CSN’s music is a cornerstone of rock ‘n roll with albums on Rolling Stone’s “50 Greatest Albums of All Time.” See this legendary band at the Orpheum Theatre.

Dust off your mitt and put on your best hot-dog-eating jersey, because baseball season is in full-swing! Located within easy walking distance of Beale Street Entertainment District, AutoZone Park sports some of most exciting action in all of the city. With the largest videoboard in minor league baseball, AutoZone Park has drawn rave reviews from publications such as Sports Illustrated and Baseball America, having been called “one of America’s 10 Best Ball Park Vacation Destinations.”

Join the party at Memphis International Raceway - Where the Racing Rocks. Test N Tune racing action plus Rocking Pit Party including live music, car show and more. You won't want to miss this.

The comedy and magic duo leave the Las Vegas strip and take their show to the neon lights of Memphis. See them at the Orpheum Theatre in Memphis this summer!

Need more things to do in Memphis? See the full event calendar.

If you would like a Memphis information pack including travel guides and maps email tennessee@deep-south-usa.com with your details.