With 2015 being The Year of Alabama BBQ it's no wonder they are number one in estately.com's list of most crazed BBQ states in America. 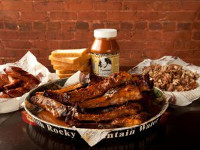 America is home to millions of passionate barbecue fans, people who love the marriage of smoke, fire, and meat. Here is what the website said about Alabama being their number one BBQ state:

Alabama believes in the sanctity of the marriage of meat and smoke, a love so pure it burns low and slow for eternity. What Alabama lacks in fame for a uniquely Alabama barbecue style it more than makes up for with unrivaled barbecue enthusiasm. A whopping 8.27% of all eateries in Alabama are barbecue restaurants, the highest percentage in the nation and the state is tops for expressing their love for barbecue on Facebook.

What about our other Deep South States? There's plenty of BBQ there too:

Tennessee is in the top seven in all categories and it’s home to the iconic barbecue city of Memphis. The state loves its barbecue so much it’s dedicated over 6.59% of all eateries to barbecue.

Barbecue is abundant in the Peach State, with the second most barbecue restaurants per capita of any state.

Over 6.36% of all eateries in Mississippi are barbecue restaurants—fifth highest in the country. If there was data available showing the frequency with which residents host a backyard barbecue the state might have been listed even higher.

Cajun and Creole restaurants still outnumber barbecue joints in Louisiana, but there are still plenty of both.