Stuck for Christmas ideas this year? How about raising some money for charity and having the experience of a lifetime?

The Great British Invasion 2015 is a blues and self-drive pilgrimage through the Deep South in conjunction with ChildLine Rocks which can be booked through tour operator Abercrombie & Kent.

ChildLine Rocks is a committee of volunterrs who have been raising money for ChildLine since 2008. ChildLine is the NSPCC's 24 hour confidential helpline for children and young people with nowhere else to turn. They received 1.4 million contacts last year from young people contacting them to talk about their experiences of issues such as self-harm, suicidal thought and abuse. It costs £4 to answer each call they receive.

As this is a charity pilgrimage we are asking participants to help raise a minimum donation of £1,000 alongside signing up for the tour, either by donating or by fundraising. You can do this at any stage before you travel but why not set up a Just Giving page and ask people to contribute as a Christmas present to help things along.

The Sons of Royalty are a jolly band of japers who continually grow and attract international interest. Their rides have taken them through some of the most spectacular scenery North America has to offer: British Columbia, Montana, Idaho, Wyoming, Utah and Colorado. In 2014 the Sons left the mountains and high deserts to journey to the Deep South and to ride Highway 61. This ride was so spectacular that it has now become an annual pilgrimage.

Existing SOR members include city slickers, special-forces veterans, best-selling authors and even a distant living relative of Butch Cassidy who was recently accorded honorary membership of the Hole in the Wall gang. They more recently welcomed Bill Luckett, the Mayor of Clarksdale, Mississippi and legendary actor Morgan Freeman as their newest members.

Last but not least, the gang boasts British rock and blues musicians as members, including its namesake, The Sons of Royalty blues and rock 'n' roll band. You can see photos from last years trip here.

Abercrombie & Kent was founded 50 years ago in Kenya, with little more than a Land Rover, a couple of tents and the all-important icemaker to ensure the clients could enjoy the perfect sundowner in the African bush. They are very excited to be joining forces with Sons of Royalty and ChildLine Rocks on the 5th annual fundraising Harley Davidson motorcycle and car ride in aid of ChildLine. Oscar-winning actor Morgan Freeman has also became involved in ChildLine Rocks just this year and his Clarksdale joint, Ground Zero Blues Club, is an invaluable addition to the trip.

As well as contributing to this fantastic and extremely worthwhile cause, all participants will be patched as members of the Sons of Royalty, who will accompany members of this trip. And thanks to the charitable donation of Morgan Freeman and Mayor Bill Luckett, Ground Zero Blues Club is now host to the final get together of the pilgrimage, and with the Sons of Royalty playing it will certainly end with a bang!

There isn't a spot on Planet Earth that has seen a soundtrack as influential as the American South. Blues, rock 'n' roll, bluegrass, soul, funk and R&B all grew up here and are synonymous with the laidback and vibrant culture of the Deep South. The charity ride will take you through three states; you will start in Nashville, Tennessee travel down to Muscle Shoals, Alabama and across to Tupelo & Memphis before arriving in the Mississippi Delta, then travelling back up to Memphis, Tennessee to fly home.

Visit abercrombiekent.co.uk for more details or to book, or call 01242 858487 if you have any questions. 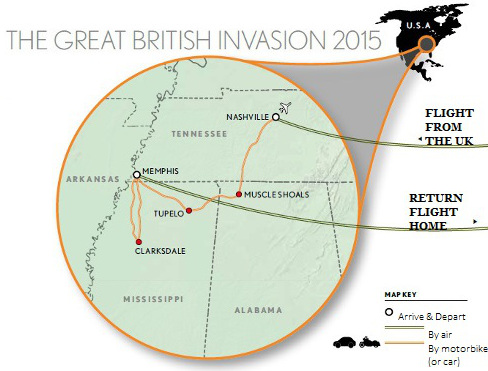