Brennan's, the French Quarter restaurant that turned breakfast into an event and spawned a dining empire, reopened this week, after a yearlong renovation. The rebirth marks the return of a New Orleans institution and the restaurant debut of a world famous designer. 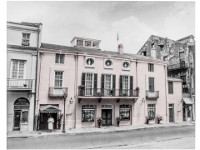 Richard Keith Langham, who has designed residences for Jacqueline Kennedy Onassis, William F. Buckley and Hilary Swank, was an unlikely but fortuitous choice for the multimillion-dollar redesign undertaken by restaurateur Ralph Brennan and business partner Terry White. When Langham talks about his vision for Brennan's, he makes references to grand spaces from New Orleans' past, such as the Pontchartrain Hotel's Caribbean Room or the Roosevelt Hotel's Blue Room.

"I wanted to keep it old-fashioned, romantic," he said. "It's a very touchy thing when you're reinventing a legend. So often, it doesn't work."

Upstairs, the King's Room, formerly known as the Rex Room, has regal, gold wallpaper and plush purple chairs modelled after those used for Queen Elizabeth's coronation at Westminster Abbey. Next door, the Queen's Room is lush, with soft blue walls and heavy curtains in a rainbow of pastel hues. Eventually, the room will display the dress that White's daughter Jane wore in 2011 when she reigned as queen of Carnival.

"I wanted to make it unmistakably Brennan's," Langham said. "Terry and Ralph and I were immediately on the same wavelength about this old-fashioned approach."

Across the hall, a long dining room looking out on the courtyard has a pineapple theme. A private lounge with mounted heads on the wall and a chess motif honours Paul Morphy, the chess master who lived at 417 Royal St. in the mid-19th century.

"As one turns to each room," Langham said, "you step into an individual mood."

The most radical changes took place downstairs. Ralph Brennan insisted that the windows facing Royal Street be open. To do that, the main kitchen had to be moved and walls rearranged. The trellis-lined main dining room is now a long, open space, which used to be a warren of rooms than ran beside the patio. Here, Langham created what he called a "fantasy of a French orangery" with murals based on 19th-century Carnival invitations. The Brennan's renovation is about preserving a piece of New Orleans' history.

“I wanted to make it unmistakably Brennan's" designer Richard Keith Langham said "Sometimes you do something, and you're not 100 percent satisfied with the results," he said. "But, here, I can see it, and I'm proud. I'm proud for our partnership, but also for the city and the block."

Brennan's, which was bought this past May for nearly $7 million by Brennan and White, at first, will offer only breakfast and lunch. But on 5th December executive chef Slade Rushing, formerly of MiLa, will introduce his dinner menu.