The Hangout Music Festival, held May each year, has always been the brainchild of founder Shaul Zislin, but Zislin announced at Monday's Gulf Shores City Council meeting that the festival had a new, powerful uncle. 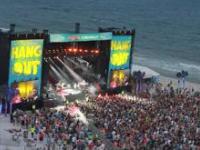 The festival announced a new partnership with Goldenvoice, the company responsible for putting on Coachella, New Orleans' Jazz Fest and the Firefly Music Festival among others. Goldenvoice is a subsidiary of the even bigger AEG Live entertainment conglomerate. The council unanimously approved amendments to its franchise agreement with the festival to extend the terms for 11 years, five more than the previous agreement, and to formally recognize the festival's new partner.

"I think more than anything it means that we have a teammate that is absolutely going to expose us to more opportunities to make a better festival," Zislin said. "We couldn't have asked for a better partnership."

Zislin said Goldenvoice has a history of not trying to change the successful makeup of other festivals it has partnered with.

"If you look at Goldenvoice's history, they're not looking to come in here and take over," he said. "They bought into this festival because they believe in what we do. The beautiful thing is that we can call up to this organization that has all these huge assets at its disposal and get help and assistance and ways to improve things."

Zislin said the agreement was effective immediately, and that the 2015 lineup -- also released Monday and featuring Foo Fighters, Beck and Zac Brown Band -- was presented by Goldenvoice and the Hangout Music Fest.

Industry publication Billboard has described Coachella as "the biggest festival in the world, with more than $67.2 million gross and 180,000 tickets sold over two weekends in 2014."

Gulf Shores Mayor Robert Craft and multiple council members expressed excitement about what the deal would mean for the festival and for the city before voting to approve the amended franchise agreement.

"We're going to have access to better acts because of the national prominence that this group has," Craft said. "They have relationships where we're going to be able to bring people here at a level that we've not had here before.

"We've been on the outside looking in at some of these acts, that will change and we'll have the opportunity to have a better festival."