President Barack Obama will be in Selma, Alabama on 7th March for the 50th anniversary of the Bloody Sunday march, a senior White House official said. 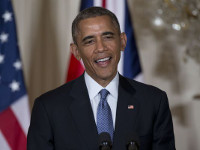 The visit will also highlight the Obama administration's "efforts to mark the 50th anniversary of the signing of the Voting Rights Act of 1965," according to a White House announcement.

"We may go at it in campaign season, but surely we can agree that the right to vote is sacred; that it's being denied to too many; and that, on this 50th anniversary of the great march from Selma to Montgomery and the passage of the Voting Rights Act, we can come together, Democrats and Republicans, to make voting easier for every single American," Obama said, according to his prepared remarks.