The Historic Chattanooga Choo Choo Complex are in the middle of a $8 million renovation and restoration project. The complex will include a comedy club, 500-capacity music/entertainment venue, retail space and two new restaurants with an outdoor patio. 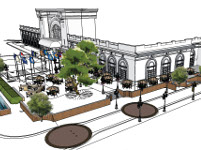 The project will also include $1 million to be invested in renovating the 65 hotel rooms in Building One.

"We will bring the building back to its early historical form, showcasing the original architectural elements," said Jon Kinsey, Managing Partner of the Chattanooga Choo Choo. "By returning the 1909 historic buidling to its original open floor plan, we will honour the past while creating new and exciting attractions in the heart of Chattanooga."

The Chattanooga Choo Choo Hotel is the city's largest hotel with 363 rooms. The hotel is also the grandest and most historic, with the Beaux Arts masterpiece that was built by the Southern Railway. It was completed in 1909 and served as a bustling rail centre known as the Terminal Station for over 60 years.

"We're incredibly excited about this investment that the Choo Choo is making in our city. This new entertainment district at Market and 14th Streets adds to the flavour of Chattanooga and creates a place where people can eat, be entertained and spend the night, said Bob Doak, President & CEO of the Chattanooga Convention & Visitors Bureau. "This project adds to the many reasons that make our community so appealing. It's great to have so many dedicated people who are investing their own dollars to make this city even better. Chattanooga truly is a city that has been reborn and transformed."

The new complex will include:

SSR 8 years
Dear Graham, Everyone is very excited about the great changes happening at the Historic Choo Choo Complex and hope that you will return to see all the changes taking place.

The Choo Choo Terminal Station was built in 1909 and became a hotel complex in the early 1970s. We are so thankful that this historic property was saved from the wrecking ball and is now experiencing a wonderful restoration.

Thanks for coming to Chattanooga and we hope you will come back again soon!

Graham Winkles 8 years
I visited Chattanooga from UK last October with my wife on our tour of Tennessee. We visited the station complex and were obviuosly disappointed at how tired and sad it all looked. We believe the complex has enormous potential if restored to its former glory and will no doubt regenerate the local area and compete with the bars and restaurants down at the riverside area which appears to attract most tourist visitors.

Good luck to all involved and maybe one day we can return to see the finished project!