Win an incredible holiday for 2 to Alabama

To celebrate the cinema release of Selma on 6th February and the 50th anniversary of this world changing event, Silversurfers.com have a  PRIZE DRAW to win a holiday for 2 people to Alabama. 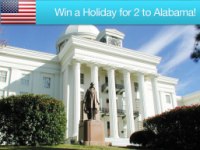 To celebrate the cinema release and the 50th anniversary of this world changing event Alabama Tourism and Pathé are offering you the chance to win a holiday for 2 to the state immortalised by the song Sweet Home Alabama. The winners will be able to immerse themselves into Alabama’s rich history by taking in some of the key locations featured in the film and walking In the Footsteps of Freedom, on the new self-drive region tour from Bon Voyage Travel, who are also our Tour Operator of the Month for February.  By day the winners will be able to take in the historical sites of Montgomery, Alabama and Selma which include the Edmund Pettus Bridge; the site of the Bloody Sunday conflict, the beautifully restored Alabama State Capitol where protesters marched to demand the right to vote and the Birmingham Civil Rights Museum. By night they can enjoy one of Americas favourite past times with a visit to the baseball, enjoy live music at one of the basement jazz clubs or dine in one of the many lively restaurants on the route.

Selma, nominated for the Oscar for ‘Best Motion Picture of the Year’ was produced by Oprah Winfrey, Brad Pitt’s company Plan B (12 Years a Slave) and Christian Colson (Slumdog Millionaire). This acclaimed film tells the gripping and moving true story of the pivotal moment in Dr. Martin Luther King Jr’s epic civil rights struggle – the 1965 protest march from Selma to Montgomery, Alabama to secure voting rights for African Americans.

Starring British Actor David Oyelowo (The Butler, A Most Violent Year) as Dr. Martin Luther King Jr, alongside Tom Wilkinson, Carmen Ejogo, Tim Roth and Oprah Winfrey, the 2015 release of Selma celebrates the 50th anniversary of the passing of the Voting Rights Act and this triumphant story of the power of the people.

Today visitors to Alabama can experience true southern hospitality and simple living as well as chic restaurants and stylish bars with superb museums and galleries. Bordered by Tennessee to the north, Florida to the south, Georgia to the east and Mississippi to the west, Alabama is the physical heart and cultural soul of the Deep South. Alabamians invite you to explore their diverse state, which sweeps down from the foothills of the Appalachian Mountains to the 32 miles of white sandy beaches on the Gulf Coast!

•  A personalised road book with a day to day driving itinerary that takes you into the heart of Alabama with visits to Atlanta, Montgomery, Birmingham and of course Selma, along the way.

To enter the competition visit silversurfers.com/prize-draws/win-an-incredible-holiday-for-2-to-alabama

For more information on Bon Voyage Travel visit www.bon-voyage.co.uk or phone 0800 316 0194, plus visit our Tour Operator of the Month page to see the other tours Bon Voyage have on offer.

For more information on the release of Selma visit www.facebook.com/SelmaFilmUK

PATT 7 years 11 months
Went to New Orleans some years ago and would just love to explore the Alabama area - and yes with some friends from USA we all danced to Sweet Home Alabama on board a boat a few years ago ... so I just need to go there ... PLEASE!

sue miners 7 years 11 months
Would love to win,love the style,music and smells of the south