The Atlanta Streetcar is the latest great happening in downtown Atlanta

The tram loop connects the Olympic Centennial Park to the Dr. Martin Luther King, Jr. National Historic Site and the historic Auburn Avenue corridor, the birthplace of the Civil Rights movement. It's free until the end of March and then it's only $1 per trip thereafter. 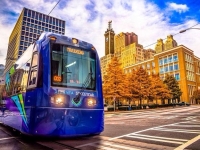 “Opening the Atlanta Streetcar is the final highlight in an incredible year of economic development for the City of Atlanta,” said Mayor Kasim Reed. “The Streetcar links neighbourhoods that have been divided for more than a generation. This project brings the largest infusion of federal funds into our transportation system in more than a decade. And even more, the Streetcar brings more energy, excitement, and investment to the neighbourhoods near some of our most important historic and tourist sites. The Streetcar will carry us into a vibrant, connected future for the City of Atlanta.”

The streetcar stops include: