Once again, Memphis in May will deliver an oustanding and diverse list of musical acts to entertain the expected 100,000 guests that will travel from across the country and all over the world to enjoy the 2015 Beale Street Music Festival. 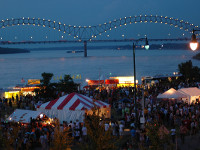 The Beale Street Music Festival at Tom Lee Park, on 1st-3rd May 2015, launches the month-long Memphis in May celebrations that also includes the Internation Salute to Poland, the World Championship Barbecue Cooking Contest and the AutoZone Sunset Symphony.

"We are bringing the best of the best of touring music talent this year," said Jim Holt, President and CEO of Memphis in May.

"We pride ourselves on presenting a diverse line-up designed to appeal to musical enthusiasts from all segments of the population across the country and around the world. The Beale Street Music Festival offers something for virtually every musical taste."

The Beale Street Music Festival has a reputation for catering to music enthusiasts of every genre and this holds true for this year's lineup. Check out their website! http://www.thebealestreetmusicfestival.com/

Is it just Memphis you wanted events for? If you visit memphistravel.com and click on what's happening you can enter the dates that you are there and it will tell you all the events and festivals taking place.

mrs june mcdaid 7 years 10 months
Can you put on line events for end of September,15-october15.thank you its for when on holiday.