15 Must-Eats in 5 Neighbourhoods in New Orleans

New Orleans and food heaven are synonymous & to ensure your taste buds get a full representation of the outstanding food found throughout the city, don't leave home without this guide for dining your way across some of the Big Easy's most notable neighbourhoods. 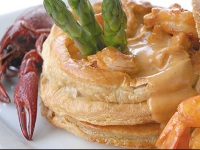 Kingfish - Kingfish is a newer restaurant on the French Quarter restaurant scene and fast becoming one of its most popular. Why? Just look at daring dishes such as Shrimp Gaufre (a waffle pirogue with barbecue shrimp) and its ample cocktail list.

Antoine's - Antoine's is celebrating its 175th anniversary and is one of the grand dames of New Orleans Creole restaurants. The turtle soup is Antoine's most famous dish and the café brulot its most famous drink plus the dining rooms are like museum galleries full of historic New Orleans photographs.  Check before you go so you don't miss out on their anniversary classics menu.

COWBELL - Cowbell's rustic-looking stencilled sign out front says simply, "Eat Happy." The restaurant delivers on that mantra, taking staples like French fries and burgers and turning them into masterpieces.

Jacques-Imo's Cafe - Jacques-Imos has attained a legendary status as the place to eat in the University area of Uptown. Find a mix of French and Creole standards like crawfish étouffée and a shrimp and alligator sausage cheesecake that simply rocks.

Café Reconcile - The down-home dishes you'll find at Café Reconcile, such as fried catfish and collard greens, are part of a quintessentially Southern experience. The restaurant is run as a nonprofit helping young men and women from at-risk communities learn about and get experience in the culinary arts.

Cochon Restaurant - Cochon is part of the Donald Link group (Pêche, Herbsaint et al), and, like those famed restaurants, the food and service here are impeccable. Cajun dishes like fried boudin and Louisiana cochon (suckling pig) are elevated to an art form.

Emeril's Restaurant - At Emeril Lagasse's namesake restaurant you can see where it all began. Emeril's has been established for 25 years and their expertise is reflected in dishes like the homemade andouille and boudin. These comprise just a small part of Emeril's phenomenal menu.

Mother's Restaurant - Ask a New Orleanian where to find casual local dining outside the French Quarter and they may well point you to Mother's. The restaurant's most famous dish is the Ferdi Special, a po-boy containing ham and "debris," another name for baked, gravy-marinated roast beef.

Melba's Old School Po-Boys - Located in the Seventh Ward, Melba's is where you can find free samples of boiled crawfish at the counter, and order a la carte from a menu that includes Cajun classics and a corn-and-grits side dish that is a meal in itself.

The Praline Connection - Frenchmen Street is famous for its live music scene, but it's also home to one of the city's best-known casual Creole restaurants. Try the fried pickles appetiser, then sink your teeth into a bowl of spicy filé gumbo — now that's New Orleans soul food.

Ralph's On the Park - Ralph's On the Park is a big part of New Orleans' history, with it's building dating back to 1860. Today, it's home to Creole classics and some of the most scenic views in town. Show up for Sunday brunch and sip bloody marys on the elegant wraparound veranda.

Café Degas - Sophisticated yet casual, Café Degas is a favourite among locals living in one of New Orleans' most scenic neighbourhoods. Sit in the garden under the live oak trees of this cottage-turned-restaurant while enjoying French dishes and delicious wines.

Rue 127 - Dining doesn't get much more local than Rue 127, a New American style restaurant housed in a converted shotgun house. Rue 127 sources many of its ingredients from Chef Ray Gruezke's family farm.

And if your belly still has room, then check out these other New Orleans restaurants.