Matthew McConaughey recently delivered a rousing speech on his love for Louisiana and the city of New Orleans while accepting an award. McConaughey, who received the New Orleans Film Society's 2015 Celluloid Hero award, called the city a "big, beautiful mess." 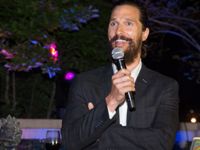 The actor won an Oscar for his starring role as Ron Woodroof in 2013's Dallas Buyer's Club, which was filmed in New Orleans, and several of his other starring roles, like HBO's True Detective and The Paperboy, were also filmed locally.

Below is the full speech:

"First of all what a big, beautiful mess it is," he said to an explosion of applause. "Cheers to that!

"I said this years ago….a friend of mine asked what is New Orleans like? I said New Orleans is like a giant flashing yellow light. Proceed with caution ... but proceed. It is not an overly ambitious place and that's being complimentary. It has a great identity, and therefore it doesn't look outside itself for intrigue, evolution or labels of progress. People here are proud of their home. You're proud of your Crescent City. You know your flavour. You know it's your very own. And if people want to come taste it with you, you welcome them with open arms. But you do not solicit.

"The hours trickle by here. Tuesday and Saturday are more similar here than any other place I've ever been. The seasons slide into one another without any status quo. Yes - it is the Big Easy, home of the shortest hangover on the planet, where libation can greet you on Monday morning with the same smile as it did on Saturday night.

"OK,  it's home of the front porch. I don't know if y'all recognise this: it's home of the front porch….not the back porch. Everyone everywhere else has back porches. The back porch is something different. The front porch is an engineering feat that lends itself to the sense of so much community around here and fellowship. Private property and lines of demarcation all land across borders. Here you relax facing the street. You do not retreat into the seclusion and privacy of your backyard. No, you engage with the goings-on of the world that is in front of you. It's a great engineering feat that you've pulled off here. It really is.

"What's my alarm here? My alarm here is church bells, sirens and a slow-moving, $8-an-hour carpenter nailing windowpanes two doors down. That's a good alarm. Do not honk your horn in a traffic jam here.

"Where else do the dead rest eye to eye with the living? New Orleans is a right-brained city. Do not come to town wearing your morals on your sleeve unless you want to get your arm burned. Yes  it's oil and vinegar, but somehow they mix. The poverty, the humidity, they both gracefully suppress all the rationale. And if you're crossing a one-way street, it is best to look both ways.

"Mother Nature rules around here. We all know that. She's the natural law queen who reigns supreme. She's a science to the animals, yet she's an overbearing and inconsiderate b---- to us bipedal humans. But here you forgive her and you forgive her quickly. You have to. You know any disdain for her wrath is going to reap more wrath, more bad luck, more voodoo and more karma, so you roll with it, ... actually you meander rather slowly forward taking it in stride and never sweating the details."

"See, the art is in the overgrowth here. Mother Nature wears the crown around here. Her royalty rules. And unlike in England, she has both influence AND power. And, like the most authentic European cities, you guys don't use vacuum cleaners to give structure to anything, you use brooms. You use rakes to manicure, because everything here lends it soft edges.

"Where it falls is often where it lays, the swerve around the pothole, the duck beneath the branch, the poverty, the murder rate, all of it is just how it is and how it came to be. Just like a good gumbo, the medley is in the mix.

If you would like more details on New Orleans or Louisiana, email us at louisiana@deep-south-usa.com and we will send you an information pack.......and we hope you love it as much as Matthew does!