The Soundtrack to New Orleans

New Orleans, as the world knows, is famous for being a musical city. It is the birthplace of jazz, one of the only purely American art forms offered to the people of the globe (the other, of course, being barbecue). 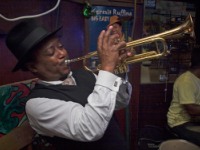 It would be an impossible task to adequately represent the sounds and rhythms of the Big Easy in a list that didn’t stretch from one end of Canal St to the other, but if you’re looking for some musical inspiration that will make you long for the Crescent City, Thrillist.com have put this soundtrack together.