The GRAMMY Museum® Mississippi have announced they will officially open its doors to the public on Saturday 14th November 2015, in Cleveland, Mississippi. The opening will mark the first GRAMMY Museum to be built outside of Los Angeles. 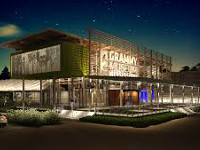 "Since opening its doors in 2008 in L.A., the GRAMMY Museum has presented visitors from around the globe with a content-rich experience that explores music's diverse history and most current trends, while helping uncover the mysteries behind the creative process of recording," said Bob Santelli, Executive Director of the GRAMMY Museum at L.A. LIVE. "We are excited to extend the Museum's mission into Mississippi, while placing a much-deserved spotlight on the state's music history — the cradle of American music."

"After more than six years of building the GRAMMY Museum's strong foundation in Los Angeles, The Recording Academy is excited to be part of the development of a new Museum site in Mississippi," said Neil Portnow, President/CEO of The Recording Academy and Chair of the GRAMMY Museum Board of Directors. "With its proximity to our Memphis and Nashville Chapters, we're looking forward to expanding the reach of the Museum's mission and programs into one of the most musically vibrant regions in America."

Built and operated by the Cleveland Music Foundation — a non-profit organisation developed in 2011 — the 27,000-square-foot GRAMMY Museum Mississippi will be housed on the campus of Delta State University, home of the Delta Music Institute — Mississippi's sole accredited music industry studies program.

"GRAMMY Museum Mississippi will be a terrific complement to Delta State's focus on music and culture through our music department, Delta Music Institute Entertainment Industries program, Delta Blues project, and Delta Center for Culture and Learning," said William N. LaForge, President of Delta State University. "We look forward to the excitement that such a wonderful facility and experience will bring to our campus, to Cleveland and to the Mississippi Delta."

"We are honoured that the GRAMMY Museum at L.A. LIVE and The Recording Academy have entrusted us with the opportunity to share their mission of celebrating music," said Lucy Janoush, President of the Cleveland Music Foundation. "GRAMMY Museum Mississippi represents an investment in the cultural music heritage of our state and will attract visitors from all across the country, as well as provide quality educational programs for students and guests of all ages."

Similar to its sister museum — the GRAMMY Museum at L.A. LIVE — GRAMMY Museum Mississippi will be dedicated to exploring the past, present and future of music and the cultural context from which it emerges, while casting a focussed spotlight on the deep musical roots of Mississippi. The Museum will feature a dynamic combination of public events, educational programming, engaging multimedia presentations and interactive permanent and travelling exhibits, including a Mississippi-centric display that will introduce visitors to the impact of Mississippi's songwriters, producers and musicians on the traditional and modern music landscape.

"Music is much more than a form of entertainment for Mississippians — it's a part of our history and legacy," said Mississippi Gov. Phil Bryant. "We're thrilled to have a museum dedicated to our part in shaping the nation's music history. Throughout 2014, we celebrated the Year of the Creative Economy in Mississippi. We invited home our greatest Mississippi artists to celebrate our creative spirit. This museum will extend that invitation and will bring visitors hoping to catch a glimpse of our vibrant energy and dynamic musical contributions."

Details regarding GRAMMY Museum Mississippi's opening events will be announced in the coming months.