Win a trip to Nashville!

Who would like the chance to go to Nashville to see The Shires perform at the Grand Ole Opry in June? 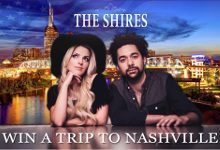 The Shires are making waves in the US; they are the first UK country act to be signed to a major Nashville label and debut album Brave has attracted attention here and abroad. Bedfordshire and Hertfordshire are a long way from Nashville but that hasn't stopped Chrissie Rhodes and Ben Earle from making country music that is attracting fans and impressing music bosses in the US as they have now been invited to perform at the legendary Grand Ole Opry....and you could be there too!

The prize includes flights for two to Nashville 3rd June with accommodation and breakfast at the Embassy Suites Nashville at Vanderbilt hotel for five nights and cash for transport while in the city. Plus two tickets to see The Shires, the first ever home-grown British country duo, at the Grand Ole Opry with backstage tour. PLUS Music City Attraction Passes for 2 people to over 30 Nashville attractions and venues with a Music City Gift Bag to take home too.

For your chance to win visit WinNashville and complete the form by Sunday 24th May. Then if you listen this Sunday from 12 noon you'll find out if you're the lucky winner and if you missed The Shires on BBC Breakfast talking about Nashville and their upcoming performance at the Grand Ole Opry you can watch it again here...

Anna Tuckett 6 years 6 months
Fab give away, thanks!

David Gardiner 6 years 6 months
Great honour for the Shires, would love to be there