The bill for this year’s Maverick Festival, held at Easton Farm Park across the first weekend of July, is bigger than ever and packed full of Americana, roots and alt-country acts from both sides of the Atlantic.This great article featured in the East Anglian Daily Times gives the low down on the whole event. 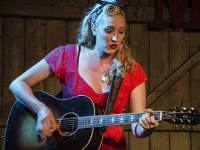 This will be the second year organisers have teamed up with the Alabama tourist board to bring artists from the Deep South state across to Suffolk. This year's line-up also includes Britain’s own folk protest singer Billy Bragg and Minneapolis-based Chastity Brown – familiar to fans of Later…with Jools Holland, on which she appeared last September, performing her single Colorado.

Festival director Paul Spencer said: “We’ve got up to 50 artists this year, which will be a record for us. The festival has grown to a point where we have five stages. We don’t programme the smaller stages morning to night, which means we can squeeze in someone who comes along to the bill late on. It was immensely flattering to get a call from Billy Bragg’s agent saying he would like to play. He’s a real fan of roots music. It’s a great endorsement for us. Plus we have many other equally acclaimed artists who perhaps don’t have the same profile in this country. We also recently confirmed Tom Paley, an American folk legend who played with the New Lost City Ramblers and is very much in the mould of Pete Seeger and the old folk traditionalists. He played at the Newport Folk Festival before Bob Dylan went electric, he will also be doing a special presentation talking to us about his Newport days. He’s 87 and shared the stage with the likes of Woody Guthrie and Leadbelly. He’s a link to that old world – the last man standing. Having him play reminds us of the long tradition of artists that is as alive as ever. We have lots of other great people. Larkin Poe are coming back to close Friday night. Joel Rafael is another folk veteran, while Chastity Brown will be representing the new generation. Gal Holiday and the Honky Tonk Revue, who have never played in Europe before, will be closing Saturday night after Billy. Among the performers will be a young musician called Jodie Goffe. We’re giving her a slot because we believe in her emerging talent.”

Other acts lining up for the eighth Maverick Festival include Case Hardin, The Dreaming Spires, Don Gallardo and The Rosellys. They will take to the Peacock stage on Friday 3rd July for the Rollin’ Revue – six hours of Americana, roots and alt-country curated by Clubhouse Records.

Alabama’s own Hannah Aldridge, Lisa Mills and Debbie Bond are also set to appear at the event, which features a camp site, bell tent meadow and tipi village, as well as showcasing a selection of local food and drink producers.

Mr Spencer said: “This will be the second year the festival has been sponsored by the Alabama Tourism Department – a partnership which has allowed Maverick to attract some talent straight from the Heart of Dixie. Because of our relationship with our friends in Alabama, we’ve managed to get a separate programme going called the Yellowhammer Review, named after the state bird. We’ll have four artists – Rick Harris, Lisa Mills, Debbie Bond and Hannah Aldridge. This relationship has been very successful for both of us because there is simply no compromise involved. We wouldn’t put the artists on if they didn’t match our ethos. It’s an example of where tying in with a sponsor can be very helpful. We also like to use local businesses wherever possible – everything from our printing in Great Yarmouth to local food producers. The toilets even come from just up the road. We’re lucky to have such good hosts. Fiona Kerr, manager of Easton Farm Park, is fantastically supportive. Over the years we have done bits of customising that we have been able to leave in place. It makes it easy for us when we take over the site. The daily capacity is just under 2,000, it means we can keep the intimacy. Losing that as we get bigger is not something I’m interested in.”

There will also be a screening of The Other Side of the Mirror, which documents Bob Dylan’s appearances at the Newport Folk Festival, including the notorious 1965 concert when the folk giant ‘went electric’.

Veteran producer Joe Boyd, who was responsible for the sound at the festival, will share his recollections and host a question and answer session.

Mr Spencer, who is also a music documentary-maker, once had the pleasure of meeting blues legends Solomon Burke and the late great BB King, who died in May.

He said: “I was making a film about Bobby Bland for BBC 4 and interviewed BB King in the process. He was absolutely fantastic to talk to. His ability to remember Memphis in the late 40s was amazing.”