CMA's big winners are coming to the UK & Ireland

The CMA Awards takes place in Nashville at the Bridgestone Arena every November and this year’s big winner at The 49th Annual CMA Awards was Chris Stapleton and with his duet with Justin Timberlake he definitely stole the show in our eyes! And find out which winners are coming to C2C next year... 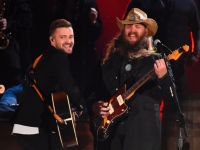 Chris Stapleton was nominated in three categories; Male Vocalist, New Artist of the Year and Album of the Year with his LP Traveller, and won every one! Other winners included Miranda Lambert, Female Vocalist; Little Big Town, Single of the Year & Vocal Group of the Year; Eric Church, Music Event of the Year with Keith Urban & Maddie & Tae, Music Video of the Year all of which are performing at next year’s C2C Country to Country – the UK & Ireland’s largest country music festival.

Here are the two epic videos of Justin & Chris sharing their passion for music and to give you a taste of what to expect from Chris at next year’s C2C….have you got your tickets yet? c2c-countrytocountry.com...enjoy!