Tom Hiddleston has released the first clip of his forthcoming movie I Saw The Light,  which tells the story of country music star and Alabama legend Hank Williams. A pretty good singing voice and lookalike don't you think? 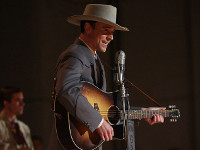 I Saw The Light, released in the UK & US March 2016, is the biopic of the Alabama born singers rise to fame and sudden death at 29. Regarded as one of the most significant and influential US singers of the 20th Century Hank Williams recorded 35 singles, 11 of which reached no.1. Your Cheatin' Heart; Hey, Good Looking and I'm So Lonesome I Could Cry were his biggest hits. The Hank Williams Trail in Alabama includes the Hank Williams Museum in Montgomery, his boyhood home and gravesite.