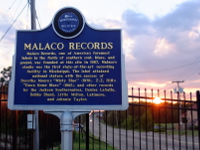 Malaco Records, which is part of the Mississippi Blues Trail, is one of - if not the last - old fashioned record companies. It's a label, it's a studio, it's a distribution centre and also an insanely tightly focussed soul & blues label dedicated to serving it's intensely local fan base. One of America’s foremost labels in the fields of southern soul, blues, and gospel, Malaco was founded in 1967. The studio was the first state-of-the-art recording facility in Mississippi. The label attained national stature with the success of Dorothy Moore’s “Misty Blue” (1976), Z.Z. Hill’s “Down Home Blues” (1982), and other records by the Jackson Southernaires, Denise LaSalle, Bobby Bland, Little Milton, Latimore, and Johnnie Taylor.

During the '60s and ‘70s Malaco often worked with larger companies such as Capitol, ABC, Mercury, Atlantic, Stax and T.K. to release and distribute the recordings produced here. Malaco specialised in rhythm & blues or soul music, although occasionally more traditional blues was recorded here. But it was the album Down Home by Z. Z. Hill (listen to Down Home Blues below) that established Malaco’s reputation in the blues. The LP stayed on the Billboard rhythm & blues charts for a phenomenal 93 weeks in 1982-83 while selling half a million copies -– an unprecedented mark for a blues LP. Its success proved that there was still a substantial audience for the blues and its production style set a standard for much of the music that followed.

The BBC program looks at how Malaco has survived & thrives in this day and age; and also at the rich musical heritage of Mississippi.