The Times and The Sunday Times Best of the USA

Our Deep South USA states have been featured in The Sunday Times 'Best of the USA - American Dreams' and The Times '50 dream holidays in America' featuring the best breaks in the states. 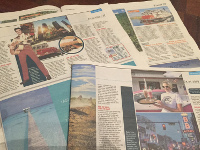 The Sunday Times have featured America's most awesome holidays and we're pleased Chris Haslam covered our wonderful part of the US:

It's neither Route 66 nor the Pacific Coast Highway, but a spectacular 2,000 mile drive from northern Minnesota to the Gulf of Mexico. It's called the Great River Road, and it follows the Mississippi through 10 states, from Lake Itasca to Venice. You need 10 days for this epic road trip, flying into Minneapolis, Minnesota, to follow Old Man River through Wisconsin, Iowa, Illinois, Missouri, Kentucky, Tennessee, Arkansas, Mississippi and Louisiana. It's a cultural tour as much as a scenic one: as you head south and the accents, the outlook, the music and the cuisine change, it becomes quite clear that America is a country as diverse as any.

Gospel, blues, Cajun, jazz and rock'n'roll were born in the Deep South, and this 14-night self-drive takes you through the history and heritage of it all. You spend two nights in Nashville before heading, via Elvis' birthplace in Tupelo, to Memphis, where, if you find Beale Street too touristy, you can head a few blocks to Wild Bill's for blues (1580 Vollintine Avenue), or to the Buccaneer Lounge, for rock'n'roll (1368 Monroe Avenue). Then drive through Mississippi's blues country to Lafayette, Louisiana, for that whole Cajun thing. In New Orleans, seek out gritty clubs such as the Spotted Cat (623 Frenchmen Street) and the Candlelight Lounge (925 North Robertson Street). The gig ends with a night apiece in Jackson, Mississippi, and Montgomery, Alabama - respective sources of rockabilly and Hank Williams.

On the border of North Carolina and Tennessee, the Great Smoky Mountains National Park is America's favourite, with 10million visitors a year, but remains curiously unknown to British travellers. For all its popularity, it's easy to be alone in this staggeringly beautiful, 816-square-mile Appalachian wilderness, which has more than 800 miles of hiking trails, 17 peaks above 6,000ft and one of the biggest populations of black bears in the country.

Boarding the American Queen - the biggest steamboat ever built - in New Orleans, you'll steam upstream on a 10-day cruise on the nation's most historically significant river. On board, it's still 1865, with antiques, juleps, a Gentlemen's Card Room and a Ladies' Parlour, while outside it's all faded mansions, plantations and Spanish moss on a trip that combines Civil War memorials, Southern charm and delta blue. Daily lectures from the resident "Riverlorian" expert put it all into context. You disembark in Memphis, where the only bar that'll match the elegance of your journey is the antiques-filled Mollie Fontaine Lounge (679 Adams Avenue).

Kentucky is bourbon, bloodstock and small-town Americana, and on this week-long self-drive tour, you'll experience all three. It begins in Lexington, ome to more thatn 450 stud farms and possibly the world's only nag-based these park (kyhorsepark.com) before ambling south through Bluegrass country to Bowling Green to explore Mammoth Cave National Park. Then hit Louisville, for more bourbon joints that you can shake a Louisville Slugger at - and the Kentucky Derby. Tickets for the 7th May event have mostly sold out, but race meetings are held at Churchill Downs between 30th April and 2nd July (churchilldowns.com).

We've got Wookey Hole (total length of caves explored: 2.5 miles). They've got Mammoth Cave (total length of caves explored: 400 miles....and counting). But, you aks, have they got a witch? Well, no. But they do have 300million-year-old fossils, a six-hour Wild Cave tour giving novices ages 16 and up a full-on-flavour of squeezy, crawly caving and 85 miles of footpaths at the surface taking in ridges and rivers, sinkholes and springs. Don't Miss....Cathedral Dome, a 200ft-high sunterranean canyon with beautifully fluted wall, visited only on the Wild Cave tour.

If you're a subscriber to The Sunday Times you can read the full article here.

The Times also featured 50 dream holidays in America...and we're also lucky enough to be featured in that too, thanks Aaron Millar!

Created in conjunction with Saveur magazine, one of America's most popular food titles, this new culinary tour through New Orleans offers private, access to one of the tastiest cities on earth. Savour the classics of creole and cajun cooking, discover the secret recipes of southern fried chicken, and then head off to the swamps for a spice tour - the essential ingredient for any New Orleans dish.

Elvis' iconic Memphis home is about to get all shook up. The Guest House at Graceland, a new 450-room resort hotel annexed to The King's former mansion, will open its doors in October. With multiple bars, restaurants, a huge outdoor pool and a 464-seat theatre, every aspect will reflect the grandeur of Elvis' style.

A twist on the usual on the usual hotel-based group tours, this new escorted road trip through the Deep South puts each set of guests in their own private motorhome - perfect for campervan newbies or those looking for a little company on the road. The 27-day itinerary is also one of the most comprehensive around, crossing six states and 2,500 miles, from the golden beaches of Florida and Alabama and the former plantations of Mississippi to the musical history of Nashville, Memphis and the non-stop rhythms of New Orleans. More information available at worldwidemotorhomingholidays.co.uk.

If you're a subscriber to The Times you can read the full article here.For more information on any of these holiday ideas email info@deep-south-usa.com and we can send you an information pack.