Ali At The O2 Exhibition.....coming soon! 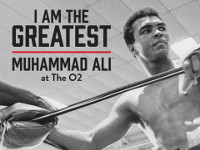 For the first time outside of USA, people will discover the true story behind one of the most recognisable sports figures of the 20th Century, experiencing a taste of the ‘Muhammad Ali Center’, the museum in Louisville dedicated to the six core principles of Ali’s life (confidence, conviction, dedication, giving, respect and spirituality) and be inspired by a story that transcends boxing glory with its humanity and diversity. The exhibition will feature more than 100 artefacts - including unseen footage, photographs and rare personal memorabilia - taking visitors through Muhammad Ali's incredible journey. A full size boxing ring, positioned at the front of the exhibition, will provide an interactive experience through which visitors will get an up close and personal look at Muhammad Ali's incomparable work ethic and revolutionary boxing techniques.

Lonnie Ali, Muhammad's wife, says "Muhammad and I are very excited to be part of a project that will connect Muhammad with a whole new generation of fans. The O2 has done an incredible job working with the Muhammad Ali Center to share Muhammad's legacy and ideals with audiences around the world. The family is anticipating that we will attend this tremendous celebration of the six core principles that shaped his life".

Muhammad Ali’s life and legacy are inspirational and impactful. The lessons learned are universal and transformative; his global footprint is enormous. Muhammad Ali is one of a select few individuals to have transcended athleticism into a symbol of larger societal issues and it is the totality of his life and the core principles that have guided him that have made him one of the most beloved symbols of peace and well-being in our nation and the world.

Muhammad Ali is far more than just a boxer though and the exhibition will also reveal the stories behind his refusal to join the American military fighting in the Vietnam war and subsequent struggle to be accepted back into the boxing world. His religious conversion and his incredible ineractions with some of the world's most powerful and influential leaders including Martin Luther King, Malcolm X and even Saddam Hussein and Leonid Brezhnev during the height of the Cold War. Beyond Mr. Ali’s international efforts, he is equally devoted to helping charities at home. In addition to co-founding the Muhammad Ali Center with his wife Lonnie, Mr. Ali hosts the annual Celebrity Fight Night in Phoenix, is involved as a founding member of Athletes for Hope and contributes substantially to the awareness and research efforts of Parkinson’s disease.

Muhammad Ali was named 'Fighter Of The Year' by Ring Magazine more times than any other boxer, and he dominated his sport like no one else ever has. In 1999, Ali was awarded both the BBC Sports Personality Of The Century and Sports Illustrated magazine's Athlete of the Century awards. In 2005, at the White House, he was presented with both the Presidential Citizens Medal and the Presidential Medal Of Freedom. In 2007, for this humanitarium work, he received an honorary doctorate of humanities from Princeton University. In 2015, he was awarded the W. E. B. Dubois Medal from Harvard University, which is Harvard's highest honour in the areas of African and African-American culture.

Ali's story that resonates with our current world situation, his mantra of peace and understanding of his fellow man, be they rich or poor, black or white, regardless of their religion is a powerful message that 'I Am The Greatest' will help visitors understand through the words, pictures and possessions of this warm, lovable and ultimately incredible man.

Muhammad Ali has proven that one person can change the world.