IM Global TV are teaming up with Johnny Depp and Richard Branson to develop a limited music drama series 'Muscle Shoals' based on Rick Hall's autobiography The Man From Muscle Shoals: My Journey from Shame to Fame. It's one of five new series projects put in to development. 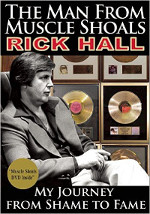 Muscle Shoals is inspired by the true-life roller-coaster story of legendary record producer, songwriter, publisher and musician Hall, founder of the modern day 'Muscle Shoals Sound' and his Fame Studios in Muscle Shoals, Alabama. Under Hall's vision and inspiration, Muscle Shoals became the epicenter for recording some of the most iconic songs in history with artists such as Aretha Franklin, Wilson Pickett, Etta James, Percy Sledge, Otis Redding, Clarence Carter and Arthur Alexander.

"Muscle Shoals in an extraordinary story in which, through adversity, some of the world's most amazing music was created. It is perfectly suited for Infinitum as it combine's Johnny's love of music and its history and our company's creative mission to tell these stories," said Christi Dembrowski, President of Infinitum Nihil.

Mark Stern, IM Global TV president added "Rich Hall and his small Alabama recording studio fundamentally transformed the music industry. His personal and professional journey and the incredible talent he worked with is a compelling story that will make a great television series."

IM Global Television plans to partner with sister company IM Global Music to make the songs themselves a focal point of the series.

"Muscle Shoals is the spiritual breeding ground for some of the most iconic songs recorded in American history," said IM Global Music President David Schulhof. "The songs recorded at FAME Studios would later be embraced and recorded by artists around the world for generations to come."

If you want to know the incredible true story of a small town with a big sound you can still purchase the Muscle Shoals DVD on amazon.com.

If you're visiting Muscle Shoals and need somewhere nearby to stay we can highly recommend the Marriott Shoals Hotel & Spa! This hotel, in Florence, Alabama, has been named the 2015 Marriott Hotel of the Year for the Eastern Region of the United States and is a finalist for Hotel of the Year, which will be announced in May.

The Marriott Shoals is one of the top hotels for guest satisfaction out of the 330+ full-service Marriott Hotels in North America. It has consistently been highly ranked since opening in 2005. For 2015, the hotel excelled in every category for the Hotel of the Year Award, including Guest/Event Satisfaction, Financial, Market Share and Employee Satisfaction.