Eleven Alabama state parks have been awarded the 2016 Certificate of Excellence from TripAdvisor. The award celebrates establishments that provide excellent guest experiences and consistently achieve positive reviews on the TripAdvisor website. 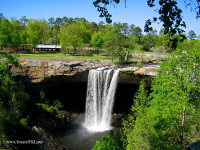 For the third consecutive year, Alabama State Parks has been recognised by TripAdvisor for excellence in providing lodging, access to nature and outdoor activities. This year the parks system received 17 awards, an increase from 11 in 2015.

“Over the last three years several of our parks have received an increasing number of excellence awards from TripAdvisor,” said Rob Grant, Assistant Director of Alabama State Parks. “We are extremely proud that our customers regard these state parks in such a consistently positive manner. The entire parks division deeply appreciates our staff, park volunteers and the customers who make these awards possible.”

Alabama State Parks also encourages visitors at its smaller parks to post their observations and experiences on TripAdvisor.

“We hope to use these recent awards as examples at some of our smaller parks,” Grant said. “The more our customers at the smaller parks share their positive experiences the better off the entire park system will be.”