There once was a couple from England...

...who chose the “wrong” Birmingham but are now planning on visiting the American South this August. 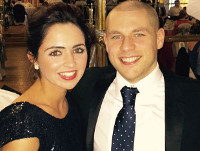 Richella Heekin’s story of booking a dream trip to Las Vegas through the wrong airport went viral earlier this year. Richella had saved for months to surprise her boyfriend, Ben Marlow, with the birthday present of a trip to the Nevada gambling paradise. She was heartbroken when she learned that, instead of the BHX airport in Birmingham, England, she had booked the flight through the BHM airport in Birmingham, Alabama.

The couple’s story, though, now promises to have a happy ending…along with a surprise detour through the Birmingham of the American South.

When the story went viral, Virgin Airlines CEO Richard Branson stepped up with free roundtrip airfare from Manchester to Las Vegas, along with a complimentary hotel stay.  Birmingham Alabama also reacted quickly with a band of city boosters inviting the couple to visit Birmingham in Alabama. They happily accepted and a generous donor stepped up to fly them from Las Vegas to their Southern destination for a two-day whirlwind tour on 16th & 17th August 2016.

The couple will be squired around the city to sample Birmingham’s award-winning culinary destinations and thriving craft beer breweries.  They also are scheduled to explore the Ziplines and other adventures at Red Mountain Park and to sightsee the city center on the new Zip Bikeshare bikes.  Another highlight will be a VIP visit to Birmingham’s internationally renowned Porsche Driving Experience at Barber Motorsports Park.

At a quick stop by downtown Regions Field baseball park, the couple will throw out the first pitch for the Birmingham Barons game - then it’s on to a concert by American singer-songwriter Jenny Lewis at Iron City, one of Birmingham’s most popular music venues.

“Birmingham, Alabama, is in the midst of an astonishing rebirth, so this is a great time for Richella and Ben to visit us,” Tom Cosby, a local city booster and instigator of the couple’s trip said.  “We could not have put this trip together without the generosity of our local attractions and restaurants, along with an outpouring of help from stalwart donors.”

Email alabama@deep-south-usa.com if you would like more information on visiting Birmingham……..Alabama!