Forever Country: The artists of then, now & forever...

To celebrate 50 years of the CMA Awards, the Country Music Association brought country's best and brightest together for the song "Forever Country" with an all-star music video to match creating country music history. 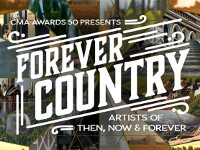 The song features 30 artists from generations of country music, coming together under the direction of CMA winner and board member Shane McAnally, who produced the track. “Forever Country” features all of the artists singing a cleverly-arranged medley of John Denver’s “Take Me Home, Country Roads,” Dolly Parton‘s “I Will Always Love You” and the Willie Nelson classic “On the Road Again” that salutes country music through the years.

Little Big Town, Lady Antebellum and Alabama are on hand to represent groups, and Kacey Mugraves lends a little cutting-edge country to the proceedings, too. Even Randy Travis gets in on the act, making a special non-singing appearance, as he is still recovering from the stroke he suffered in 2013.

Filming each of the 30 artists featured in the video took place over three days in Nashville, Tennessee during the annual CMA Music Festival in June. While the musicians (who are all former CMA Awards winners) were shot on a green screen, the video comes to life with images of fields, farms, back roads, railroad tracks, Nashville’s Lower Broadway and other iconic locales throughout the world. Brooks & Dunn reunite to sing together in the middle of a field, while Nelson is beneath the Eiffel Tower and Musgraves is shown on Lower Broadway.

As McAnally explained at a press event and preview screening of the video on Monday 19th September, he wanted Paisley, a West Virginia native, to open the song with Denver’s “Take Me Home, Country Roads” and to showcase Underwood for the big moment in Parton’s “I Will Always Love You.” Tim McGraw and Faith Hill were placed in a similar spot during their filming, while the Lambert and Bryan duet happened accidentally. As a result, it was decided to place them beside each other in the video. “When she sang the same line he sang she did an amazing move that sounded like the harmony to his part,” McAnally explains.

"All the people involved are people that we love and that we loved 10 years ago, 20 years ago and today," says Tim McGraw of the song's lineup of legends and legends-in-the-making.

"There's every era of country music in this song and in the video," echoes Trisha Yearwood. "I'm just trying not to be giddy the whole time. I'm supposed to be emoting and I'm really just going, 'This is so cool!'"

Forever Country: Behind The Scenes