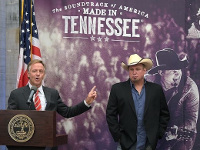 In a special ceremony at the State Capitol, Gov. Haslam named Brooks a Tennessee Ambassador of Goodwill in honour of the achievement, which brings the title of most Diamond-certified artist home to country music and the state of Tennessee. Brooks had previously been tied with The Beatles, who have six Diamond-certified recordings. All seven albums were recorded in Nashville.

Haslam also announced the launch of a partnership between the Tennessee Department of Tourist Development and Garth Brooks, which includes a special “thank you” performance for fans in the singer’s adopted home state of Tennessee. Brooks will take the stage at Ascend Amphitheatre in Nashville on Monday, 24th October at 7 p.m. and the event is free. Additionally, there will be a viewing area at Riverfront Park in downtown Nashville, where fans can watch the celebration live on giant video screens, enjoy refreshments from local vendors and receive special giveaways.

“Garth Brooks can live and make music anywhere he wants, and the fact that he has chosen to do that in Tennessee says a lot about our state,” said Gov. Haslam. “We're grateful he is partnering with us because he represents our state so well and inspires people to visit Tennessee and experience, as we say, the Soundtrack of America.”

Free tickets for the celebration show will be available using codes issued on TDTD’s new Snapchat account @Tennessee. By following the account, fans can access these codes as well as exclusive Garth Brooks stories and surprise celebrity takeovers.

"I feel very lucky and blessed to get to team with the state of Tennessee to bring the seven Diamond Certifications to the home of country music. The journey has truly been a genuine partnership,” said Brooks.

The RIAA Diamond Certifications highlight the seven Garth Brooks albums, which were all recorded in Tennessee, that have individually sold more than 10 million copies. The albums that have reached this achievement are Garth Brooks, No Fences, Ropin’ The Wind, The Hits, Double-Live, Sevens and The Ultimate Hits. The seven Diamonds celebration further supports the state’s dedication to music and tourism initiatives as part of “The Soundtrack of America. Made in Tennessee” program.

Tennessee has long been known as a global music destination, where the genres of blues, bluegrass, country, gospel, soul, rockabilly and rock ‘n’ roll originated and has more musicians per capita than any other place in the world. It is the state where artists come to create and perform their music. Tennessee is home to world-renowned music attractions like Graceland, Beale Street, Country Music Hall of Fame and Museum, The Bluebird Café, Birthplace of Country Music Museum, Grand Ole Opry and the famous Ryman Auditorium.

For more information, visit tnvacation.com and follow @Tennessee on Snapchat.