USA Today featured this great article on Kentucky which we just had to share with you all. Some people say that there’s only one word that describes Kentucky: horses. But there’s a second that’s just as telling: bourbon. 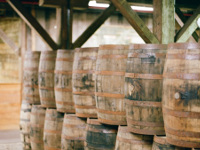 Kentucky is the birthplace of America’s only native spirit (as declared by Congress, after all) and produces 95% of the world’s bourbon. There’s so much bourbon in the state that the barrels outnumber the people: For every one Kentuckian, there are 1.5 barrels - according to the Kentucky Distillers’ Association.

Yet while it’s fun to chew on these numbers, it’s more fun to chew on bourbon (and yes, you can “chew” it) when exploring the Bourbon Trail. Starting in Bardstown; the self-proclaimed Bourbon Capital of the World & host of the Kentucky Bourbon Festival every September. At least six distilleries call the Bardstown area home, making it a popular base camp for folks taking the Bourbon Trail, a tour of local, historic distilleries, all members of the Distillers’ Association and all worth visiting.

This article doesn’t knock out the entire trail, but there are a few! By Karen Asp, USA TODAY GoEscape magazine:

Taking to the trail

You can book a tour and leave the driving to others, but self-guided tours allow greater flexibility in your schedule and that’s the route I take. Before designing your itinerary though, check each distillery’s hours and tour schedule. Not all of them are open seven days a week and while some offer complimentary tours, others don’t.

Maker’s Mark, for instance, offers tours on a first-come, first-served basis and because it’s a popular venue on a beautiful campus — the distillery is on the National Register of Historic Places — it’s worth going early in the day. (There’s complimentary bourbon-flavoured coffee if you need a pick-me-up.)

The roughly hour long tour includes fascinating history about the distillery, including how the founders created the recipe for their bourbon, testing potential grains by baking bread with them and deciding which tasted best. A favourite bread was eventually chosen, a recipe evolved and Maker’s Mark was born.

I sample that recipe first hand, and by that, I mean before it becomes bourbon. We enter a room with massive tanks of what looks like bubbling corn meal. It’s really the yeast bubbling as it eats the sugar, called distiller’s beer and when I’m encouraged to dip my finger in to taste some, I don’t hesitate. (Don’t worry; it’s cooked at such a high temperature that any germs are destroyed.) Day one mash is better, reminding me of sweet grits, compared with day two mash, akin to flat beer.

The tour winds through the distillery, including the dipping line. Maker’s Mark is famous for its hand-dipped red wax tops, none of which turns out the same. An insider tip? Look for the “liberal dip” where the red wax goes below the label. Although rare, dippers do this intentionally to create a fun find on liquor store shelves.

I’m most impressed, though, by the warehouse. Most distillery warehouses are basic wood or brick structures, but Maker’s Mark has taken décor to a new level, adding a permanent installation by glass sculptor Dale Chihuly . The handblown glass ceiling, called The Spirit of the Maker, gives the barrel room a zen-like feel, the perfect setting for the angels to take their share. (The “angels’ share,” by the way, refers to the amount of bourbon that evaporates off the barrels.)

The tour ends in a tasting room with classroom-style seating. Four pours of different bourbons await, but first, I learn how to taste. I look at the color, sniff the bourbon and then taste it, holding the bourbon in my mouth for three seconds — “We call it the Kentucky chew,” says my tour guide — before swallowing.

You can, by the way, dip your own bottle, which my husband does. After purchasing your unwaxed bottle, you’re suited up in safety glasses, an apron and a pair of long gloves, protection against the hot wax.

Willett Distillery is another Bardstown favourite and although it’s smaller than most, it has an interesting story. It’s a family-owned operation and is planning to open a five-room B&B on its property. Best part about this tasting? A visit by Willett’s resident cats, adopted from a local shelter to keep the mice at bay.

By the time I get to Barton 1792, my head is spinning and not from the bourbon! I’m only three distilleries in and they’re starting to blur. As well they should. “All of the distilleries are the same,” my guide here says. “We all produce alcohol, but we all do it differently.”

Of course, all bourbon must contain at least 51 percent corn, be aged in charred new oak barrels, stored at no more than 125 proof and bottled at no less than 80 proof, but after that, every recipe varies.

In Barton 1792’s warehouse, I get a better look at how the distillery monitors and balances the weight of the building. Because the wood of both the warehouse and the barrels shifts, swells and shrinks from temperature and humidity changes, plus changes in the weight of the barrels because of the angels’ share, a warehouse can become unbalanced, especially as new barrels are loaded and older ones are taken out. Maker’s Mark monitors this by watching a dangling plumb line; if the line swings too far off center, the barrels need to be rearranged, which fascinates me.

Jim Beam and Four Roses (which also has a distillery in Lawrenceburg, home to a Spanish-mission style facility that’s also on the National Register of Historic Places) round out the current Bardstown-area six. Two more are opening soon.

And even if you’re a beer lover at heart, let’s see if the bourbon wins you over. Click for more information on the Kentucky Bourbon Trail.