For the first time since 1978, music and history fans will be able to see Muscle Shoals Sound Studios as it appeared in its 1970s heyday. 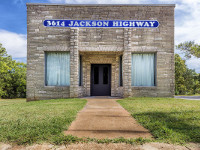 The studio at 3614 Jackson Highway, is open for tours after months of restoration, but originally operated at that location from 1969 to 1978 and is now owned by the Muscle Shoals Music Foundation - a nonprofit organisation.

The owners of the studio at that time -- the Muscle Shoals Rhythm Section -- moved their operations to more spacious quarters on Alabama Avenue on the banks of the Tennessee River. It was sold to Malaco Records in the mid-1980s before closing almost 20 years later.

"This has been a long time coming," said Judy Hood, chairwoman of the foundation. "We want to honour the history and sustain the legacy of the legendary Muscle Shoals sound."

She said the opening schedule is from 10 a.m. to 4 p.m. Monday through Saturday. The studio will be a working recording facility and will be available for sessions in the coming months.

"One thing we are very cognizant of is that 40-percent of our visitors are international," she said. "We're trying to have hours that suit their schedules. Some of these people have saved up for a couple of years just so they can walk into the studio."

The studio is the Alabama Tourism Department's Attraction of the Year for 2017.

The studio was restored with a grant from Beats by Dr. Dre, which is now owned by Apple. Though the amount of the grant has not been revealed, those familiar with it say it was substantial.

"Without Steven Badger's documentary, the (Alabama) Music Hall of Fame would probably still be closed and Dr. Dre and the people at Beats Electronics probably would not have known that the studio in Sheffield was just sitting there waiting to be revived," he said. "And Rick Hall might still be waiting for his lifetime achievement Grammy award."

"Because of this designation, (Muscle Shoals Rhythm Section bassist) David Hood was interviewed live on BBC Radio in London," he said. "That just shows the strength of the Muscle Shoals music brand."

Admission is $12 and group rates are available. Credit goes to the article “Muscle Shoals Sound Studios open” by Robert Palmer in the Times Daily: