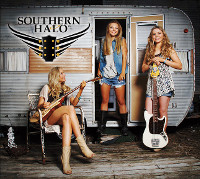 Their current single, ‘Living Like That’ is out now (listen via Soundcloud here) and appears poised to follow the success of their earlier releases. With the support of Gibson Guitars, Hilton Manchester Deansgate and Canary Riverside Plaza Hotel, Southern Halo will tour the UK from 18th - 22nd March 2017.

The Mississippi Delta is revered as the birthplace of Blues and Rock & Roll but is also the home of Southern Halo, a soulful sister trio hailing from the small town of Cleveland, Mississippi. Growing up in an area so rich in musical history had its benefits for Natalia, Christina and Hannah Morris: a close-knit family nurtured the girls love of music and community. Their first live performance was in Cleveland at a local restaurant when Hannah, the youngest, was just nine years old.

In the years since, Southern Halo has crafted a signature sound that is a blend of classic Country and ‘Pop Country’ with a dash of Southern Rock. It’s youthful, energetic music - made immediately recognisable by the sweet sibling harmonies that have become Southern Halo’s trademark. The girls lay it all out on the line during their high-energy stage shows, honing their chops as openers for top-tier acts Brantley Gilbert, Eric Paslay, Maren Morris, Love and Theft, Tyler Farr, Randy Houser, John Michael Montgomery, Parmalee, Old Dominion, Jamie Lynn Spears, Craig Campbell, Uncle Kracker, Julie Roberts, American Young and B.B. King.

With the release of ‘Southern Halo’, the band’s career took off – and the trio’s popularity continues to grow. Last year they made their CMA Music Festival debut with appearances on two separate stages; were named Nashville Universe’s Vocal Group of the Year 2016; performed at an elite pre-GRAMMY Awards show on the rooftop terrace of the GRAMMY Museum at LA Live in Los Angeles; launched Townsquare Media's ’Say It With Pepsi’ Concert Series; and performed during the 63rd Annual Nashville Christmas Parade television show. Brand partnerships were forged with Gibson Guitar, Claire’s, and Radio Disney Country, and the siblings now host a weekly radio show, ’Hangin’ With Halo’, stateside on powerhouse WDMS-FM and globally on CMR Nashville. Their music videos can be seen on Radio Country Disney, CMT, MTV and The Country Network.

The band’s hypnotically-upbeat Country radio debut, ‘Little White Dress’, caught the attention of U.S. radio & press and gained them early recognition in Europe; the track spent an incredible eight weeks at #1 on the International Hotdisc Chart. Their sophomore single, ‘Rewind’, was a U.S. Top 40 Music Row Country Breakout™ Chart hit that also held the #1 spot on the Hotdisc Chart for two weeks.

You can listen to their music via Spotify/Soundcloud or buy tickets at wegottickets.com/southernhalo. Plus.....visit our Facebook page to win a pair of tickets to their London show or for more information visit southernhalo.net.