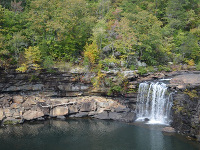 There are Alabama's beautiful sunny Gulf Coast beaches but there’s a wilder kind of water adventure in the northeastern corner of the state.

Rafters and kayakers will find some of the best white water in the South in the Little River Canyon National Preserve. But beware: They don't call the most harrowing stretch "the Suicide Section" for nothing. These are expert-level rapids. To witness nature’s force from terra firma, soak in views of Little River Falls while picnicking nearby.

The Little River's diminutive name is deceiving. It's taken thousands of years for the river to carve out one of the deepest canyons east of the Mississippi River. The various creeks and tributaries that make up the Little River have the unusual distinction of flowing on top of a mountain. The river meanders atop Lookout Mountain from Georgia into Alabama. At its highest point, the river is 1,900 feet above sea level. It eventually plunges off the Cumberland Plateau at the head of the canyon.

At 400 miles, the cave is the big -- really big -- draw. There's a lot to do around Mammoth Cave National Park, but the world's largest-known cave system features areas like the Rotunda, one of its largest rooms, and Frozen Niagara, a dripstone formation that resembles a stopped, still waterfall.

Tours offer a curated look at the caves, ranging from a couple of hours of easy walking to strenuous, daylong journeys. In addition to family-friendly hikes, there are lamplight tours, evening journeys and adults-only "wild" tours that require climbing and squeezing into little-seen areas.

Visitors have been touring Mammoth Cave since 1816, long before it was a national park. These days, the area less than 100 miles south of Louisville encompasses acres of old-growth forests known as the Big Woods, more than 70 miles of backcountry trails and historic sites such as the Good Spring Baptist Church and cemetery.

Louisiana's wetlands are some of the country's youngest, and they teem with life. Sprawling over bayous and swamps and bustling with alligators, anoles and more than 200 species of birds, the Barataria Preserve's 23,000 acres hold the rich ecological bounty of the Mississippi River.

One of the six sites that make up Jean Lafitte National Historical Park and Preserve, Barataria is crisscrossed with boardwalks and trails such as the Bayou Coquille Trail and the Palmetto Trail. Snakes and other wildlife won't always avoid the boardwalks, so keep your eyes peeled. And watch where you put your hands: What looks like a mound of dirt could be a fire ant colony.

Canoe and kayak through the waterways for an up-close look at the residents. Just check with rangers before you head out as some areas become impassable after too much vegetative growth.

Mississippi's wild barrier islands cry out for an aquatic expedition. The Mississippi members of the Gulf Islands National Seashore are only accessible by boat.

Horn and Petit Bois are federally designated wilderness islands, practically untouched by humans. Navigate your own boat or go by private charter, then pitch your tent on their powdery white shores for a true taste of primitive camping. Fish, hike, bird watch or swim from your peaceful home base. You can also camp on nearby East Ship Island and on part of Cat Island.

East Ship is just one half of the former Ship Island, which was sawed into two by Hurricane Camille in 1969. West Ship Island is the only one in the Mississippi group that's accessible by ferry. During your day's exploration of West Ship, be sure to check out Fort Massachusetts, a 19th-century fortification shaped like the letter D.

Cades Cove is no cove. One of the most popular spots at Great Smoky Mountains National Park, it attracts millions of visitors a year.

Cades Cove is actually a forested Tennessee valley, surrounded by the mountains and still richly populated with historic settlers' homesteads and diverse wildlife. The cove is also home to multiple caves. Gregory's Cave was designated as a fallout shelter during the Cold War, ready to hold 1,000 people.

Touring the valley is only a question of how much time you're willing to spend: An 11-mile, one-way loop road encircles the area, which also has more than a dozen hiking and horseback trails. Be on the lookout for the resident white-tailed deer, black bears, coyotes and turkeys.

You can read the full article on all states here...