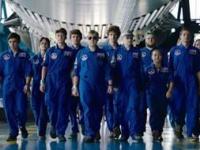 A documentary starring Space Camp in Huntsville, Alabama has launched to a global audience of more than 140-million people. The film, which premiered at the 2017 Sundance Film Festival, examines the science, politics and philosophy behind a journey to Mars and features students attending Space Camp at the U.S. Space & Rocket Center in the summer of 2015.

The documentary was selected to open this year's Sundance Film Festival in Park City, Utah, where Sundance audiences loved the film and the young space campers who came to its debut.

Emmy Award-winner Michael Barnett directed the full-length project, which is a first-time collaboration between Time and Netflix.

According to a Netflix news release, the documentary “is a comprehensive look at the little known history of mankind's efforts to reach Mars as seen through the eyes of the teens who aspire to be the first ever to set foot on the Red Planet, as well as the leading experts currently pushing the boundaries of technology and innovation in space exploration. The film sheds light on just how close we are to a manned mission to Mars and the incredible impact that such a journey would have on both the scientific advancement and the collective pride of the people of Earth.”

In addition to Space Camp students and staff, a number of notable people appear in the film, including astrophysicist Neil deGrasse Tyson, Bill Nye, then-NASA Administrator Charlie Bolden and Space X’s Elon Musk, among others.

You can go to the moon and back at the U.S. Space & Rocket Center, the Official NASA Visitor Center, which has received a Certificate of Excellence award from TripAdvisor for several years for consistently earning great reviews. The U.S. Space & Rocket Center, a Smithsonian Affiliate, is home to Space Camp®, Aviation Challenge® and Space Camp® Robotics, the Apollo 16 capsule, the National Historic Landmark Saturn V rocket and world-class traveling exhibits. USSRC is the Official Visitor Center for NASA Marshall Space Flight Center and a showcase for national defense technologies developed at the U.S. Army’s Redstone Arsenal.

To learn more about the exciting programmes and activities at the USSRC, go to www.rocketcenter.com.