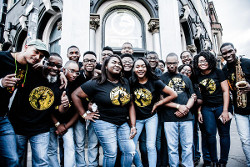 For this very special show the Stax Music Academy celebrated the famous 1967 tour with music by Otis Redding, Sam & Dave, Carla Thomas, Eddie Floyd, Arthur Conley, Booker T. & the MGs and more (sponsored in part by the Memphis Convention and Visitors Bureau and the Tennessee Department of Tourist Development) with great reviews from everywhere they went.

If you are a lifelong Stax Records fan but didn’t know how the Soulsville Foundation is carrying the legacy of the label The Stax Music Academy is the only school in the world teaching students the art form of American soul music and the sound that was created in Memphis during the 1960s and 1970s becoming a worldwide phenomenon.

The Academy is located opposite the Stax Museum of American Soul Music, also part of the Soulsville Foundation, on the original site of Stax Records. The museum offers interactive exhibits, music videos, items of stage clothing, records and filmed interviews with vintage recording equipment telling the story from beginning to present of American soul music, with particular focus on Stax Records.

Because the majority of the Stax Music Academy students live at or below the poverty line and attend via scholarships provided by the Soulsville Foundation, this Stax Music Academy trip represented the first opportunity to travel beyond Memphis for many of the young people involved. It has proven to have significant impact on the students’ desire to succeed in life, to boost their self-confidence and self-esteem, and to make them think more globally.

Here's just a couple of videos from their tour to highlight their amazing talent and the feel good factor they spread everywhere they visited but more videos are available here...