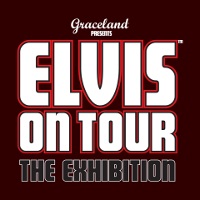 Following the mammoth success of the 2014/2015 Elvis at The O2 exhibition, which was visited by over 200,000 people, Elvis on Tour The Exhibition will showcase more than 200 artefacts from the Graceland archives many of which will be in the UK for the very first time.

This new exhibition covering the years 1969 – 1977 will provide an in-depth look at the world that was Elvis on Tour, offering a unique insight into exactly what drove the audiences wild in the ’70’s – the chance to see the King in concert as he toured America.

Bringing together dozens of examples of Elvis’ costumes and stage wear along with the guitars, jewellery, posters and - for the first time - unique interviews with Elvis’ touring band, Elvis on Tour The Exhibition will take fans into a world where millions of people watched the greatest live rock and roll shows ever staged, which at one point was televised to over one billion people worldwide.

Providing an insight into what went on backstage, the planes, the clothes and of course the music, Elvis on Tour The Exhibition will bring fans as close as possible to the experience of seeing the King live for themselves.

Artefacts showcased in Elvis on Tour The Exhibition and leaving Graceland include:

Priscilla Presley comments: ''To have a second exhibition dedicated to Elvis opening in London is remarkable. We were overwhelmed by the huge numbers, who were not only fans but people who were curious to learn more about Elvis, who visited the last exhibition at The O2. Elvis was beloved by his fans and they also meant the world to him. We are delighted that this carefully curated selection of over 200 artefacts from the Graceland archives will give them the opportunity to gain an even greater insight into his life and how he impacted popular culture around the world through his music, movies and personal style. Lisa and I are excited to share these treasured memories that cover 1969 - 1977 for this unique exhibition in London.”

Priscilla Presley will be making a very special appearance in London on 30th November 2017, joining the Royal Philharmonic Concert Orchestra on stage at The O2 as part of the Elvis in Concert – Live on Stage UK tour.

Angie Marchese, director of archives at Graceland, added: “It is so exciting to curate a second Elvis exhibition at London's O2 Arena. Focusing on Elvis' touring years and showcasing items that have never been displayed outside of Graceland before.”

Elvis Presley™ needs no introduction, he is the world’s biggest selling recording artist, with sales in excess of one billion records.  His American sales have earned him Gold, Platinum or Multi-Platinum awards.  Nominated for 14 GRAMMY® awards (three wins), at the age of just 36 he was given a Grammy Lifetime Achievement Award.  Elvis starred in 33 films, made history with his television appearances and specials and achieved great acclaim through his record-breaking live concert performances on tour and in Las Vegas. Ground-breaking and revered, Elvis is a true icon of the 20th Century.

Connect with Elvis on Tour:

Elvis Presley’s Graceland, in Memphis, is music’s most important and beloved landmark, with hundreds of thousands of fans from around the world visiting the historic home each year. Elvis Presley Enterprises, Inc. (EPE) manages the operations of Graceland and its related properties, including Elvis Presley's Memphis, Graceland's new entertainment and exhibition complex over 200,000 square feet in size; the AAA Four-Diamond Guest House at Graceland 450-room hotel; and the Graceland Archives, featuring thousands of artefacts from Elvis’ home and career. EPE also produces and licenses Elvis-themed live events, tours and attractions worldwide. Graceland Holdings LLC, led by managing partner Joel Weinshanker, is the majority owner of EPE. In 2015, Graceland was named the world’s “Best Musical Attraction” and “Best Historic Southern Attraction” in the USA Today 10 Best Reader's Choice Awards and in 2013, voted the #1 “Iconic American Attraction” in the same poll. For more information on EPE and Graceland, visit www.graceland.com