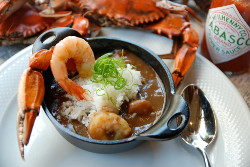 Dickie Brennan will take up residency at Boisdale of Canary Wharf from Monday 25th September to Sunday 1st October and Galatoire’s will host a special pop-up dining series at the Beaumont Hotel from Wednesday 27th to Saturday 30th September.

“We are thrilled to see these highly regarded Louisianan chefs and restaurants bringing their skills and passion for food to London,” says Neil Jones, Senior Account Manager for New Orleans CVB & Louisiana Office of Tourism UK & Ireland. “This has been a great year for New Orleans with the launch of the direct service from London Heathrow with British Airways. The timings of the flights make it easy to consider the city for a long weekend to discover some of the city’s signature dishes or to book a longer trip and explore the plantation homes and bayous of Louisiana and the South.”

The Brennan family, of Irish descent, created a culinary tradition regarded as the epitome of New Orleans fine dining. Dickie’s culinary aptitude has received many accolades including “Best Steakhouses in the United States” (Travel + Leisure) and “Best New Restaurants in America” (Esquire).

With the New Orleans Pop Up, guests will be taken on a culinary journey to Louisiana. The menu will showcase some of New Orleans’ best loved and famed dishes including Gumbo Ya Ya, Savoury Crabmeat Cheesecake, Langostino Etouffee, Shrimp and Grits and Bananas Foster.

During the New Orleans week Boisdale will be featuring great music from Don Pipkin, The Mississippi Swamp Dogs and The Dixie Devils, perfectly complementing the Dickie Brennan dining experience.

Bookings for lunch, dinner or music events can be made on Boisdale’s website.

Join Galatoire's for a special pop-up dining series at the Beaumont Hotel in London.

The traditional NOLA restaurant will also be hosting food and wine pairing dinners in The Lotos Room at The Beaumont on the 28th, 29th and 30th September featuring wines from Louis Jadot, Veuve Clicquot and Daou Vineyards. Full menu and pricing details can be found here.

To book your table in The Colony Grill Room, email reservations@colonygrillroom.com or call 020 7499 9499.

The Brennan family has been perfecting the art of beef preparation in their family restaurants. That's why at Dickie Brennan's Steakhouse we grill our chops, sear our strips, oven-roast our prime rib and broil our filets. The same level of attention extends to the service. In Dickie Brennan's own words, "We're not here for today, we're here for 50 years down the road."

Founded in 1905 by Jean Galatoire, this infamous address distinguished itself on Bourbon St. from its humble beginning. From the small village of Pardies, France, Jean Galatoire brought recipes and traditions inspired by the familial dining style of his homeland to create the menu and ambiance of the internationally-renowned restaurant. In its fifth generation, it is the Galatoire family and descendants who have carried the tradition of New Orleans’ fine dining restaurants and influenced its evolution. The restaurant’s culinary customs and reservation statutes have been preserved with little change throughout the decades.